No monopoly of violence 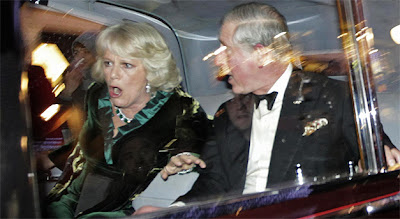 One would like to think that those who attempted to trash Charlie's car last night were protesting against his green idiocy. We can all dream, but that one would be more of a fantasy. Several things do emerge from the incident, however – not least that so unprepared was the Prince that he had to be warned to wind up his window to stop attackers throwing things inside the car.

The man is probably so detached from reality that he probably thinks he shares the popularity of his grandma. One thing is for sure, being a Greenie hasn't done him any favours.

One also notes that there are questions being asked about the "intelligence" of the police in allowing the royal car down such a vulnerable route, although it has to be said that only politicians could be asking whether the police have any intelligence. The rest of us already know the answer.

As for the stoods ... they may or may not have been responsible for attempting to trash the royals, but in return they have been so royally screwed that they don't even begin to understand how badly.

Not least of the problems for so many is the destruction of the polytechnics and the conversion of so many well-founded technical and vocational courses into ersatz degree courses, which now attract tuition fees. The previous structures, flawed though they were, were far better than are available now, the current situation thus conforming with the standard public service paradigm – less for more (money).

What is interesting though is that some students are getting a real education out of all this – one for which there are no direct tuition fees. That lesson, of course, is that violence always pays. That is how you get the attention of the ruling élite. To say otherwise is to believe the establishment lie for, in the final analysis, the state relies on violence to get its way (try not paying your Council Tax and you'll find out for yourself).

Despite Scotland Yard condemning the "outrageous and increasing levels of violence", therefore (they would, wouldn't they), it is occasionally useful to remind those in power that they do not hold the monopoly of violence. If that means giving the heir to the throne and his wife a bit of a fright, that also is no bad thing.

Soon enough though, we are going to have to show the stoods how to do the big picture as well. Yesterday looks to have been amateurs' night out.