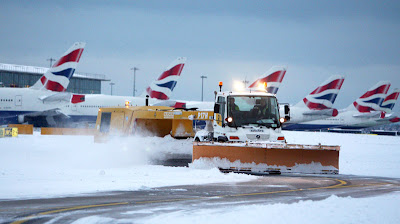 In between being a propaganda sheet and a comic turn, The Sunday Telegraph does occasionally deliver an interesting story - this one on Heathrow's lack of preparedness for the snowy conditions.

What emerges though is not only that capability was inadequate but that the snow clearance plan was known to the government and had been approved by it. All this really does, therefore, is confirm the Booker thesis that the government had been so misled by the Met Office and its views on global warming that it did not believe that preparations for a severe winter were necessary.

In a sense, it is now a blessing that the warmists have now decided that cold winters are caused by global warming. At least now, they can admit that snowfall has not been abolished and that public funds can be expended on preparing for it. But when it comes to blame, it is to government that we should be looking, as well as the management of Heathrow. The lead must come from the very top, and the blame belongs there as well.

There is no point in expecting the warmists to get the message. They are beyond redemption.