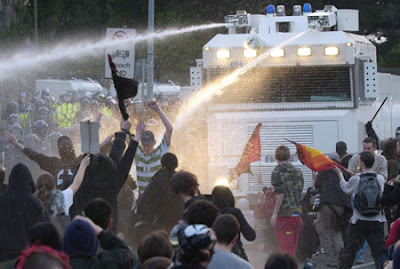 What is to be done? This is a question my former co-editor poses over on her blog. But she is doing no more than the dozens of people I talk to every week – the same as is being done by hundreds and thousands, and even millions.

Helen's first response is to suggest that we harness the power of the internet – the blogosphere and the social media. In so doing, she takes a sideswipe at the "perestroika organizations" like Open Europe or the Taxpayers' Alliance. They are – in my words, not hers - "Uncle Tom" organisations, which soak up money and neuter dissent, diverting it into harmless channels. Concentrate on the main issues, Helen advises, and assume your audience is capable of understanding them.

That might get us somewhere, but Helen then goes on to ask whether anyone has any better ideas. For many, the answer is that we need a demonstration. But, in my view, that is the last thing we need. That is playing The Man's game – asking "pretty please" if we can come down with our placards, to be corralled or "kettled" in approved areas, and then ignored.

What we actually need, therefore, is not so much a demonstration as an assertion - an assertion of power. Upon this rests the simple constitutional principle that sovereignty, and thus power, rests with the people. That principle, however, has been steadily diluted to the extent that those who purport to represent us have now assumed that power and believe it to be their own.

Thus, what we need to do is assert our power – hence the assertion. We need to remind those who would seek to rule rather than govern us where the power resides. In appearance, there would be little to distinguish between a demonstration and an assertion. But the principle is very different. In an assertion, we go where we please and when we please. The role of the police – as our servants - is to assist us.

To make this work, only one thing is needed. Determination. If enough people want to make it happen it will happen. And that means putting, at the very least, a million people on the streets – we call them already a Million Angry People.

Timing, of course, is crucial. There is to be a general election in 2015. December 2014 therefore, is a good time to put a million people in Parliament Square, enough to make it very clear to those who will be seeking election that they will be there on license. A condition of that license will be a commitment to the immediate removal of the UK from the European Union. And that is just for starters.

But for us to start, we have to organise. A thousand people are needed. They recruit ten each. Those recruit ten. They recruit ten. We have our million and their corps of leaders. Then we march. This is no fantasy. It is about our survival as a free nation. We roll over, or we march. Simples. Unless, as Helen says, anyone has a better idea.