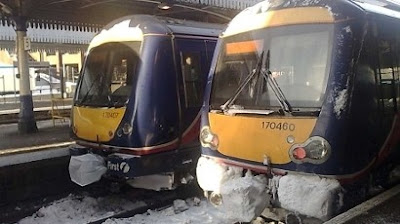 For this blog, it is well-evident what the main news of the week has been – and hardly surprising, given the personal, political and economic impact of the bad weather. But, reading some reports, you really do wonder which planet some people inhabit. From The Independent, for instance, we have the comment that at 1pm yesterday, more than a quarter (28%) of rail services were not running. Of those able to operate only just over half (53%) were running on time.

But then we get the Association of Train Operating Companies (ATOC) saying that services in south east England and Scotland were the hardest hit. This leads to ATOC chief executive Michael Roberts delivering these immortal words. He says: "We recognise that lessons can be learnt and, in particular, that the whole industry needs to get better at handling disruption."

This, to me seems the classic of the age. Public figures, utilities – you name it - make complete pigs' ears of the jobs they are paid to do and, when they go belly up, we get this trite, lame mantra: "We recognise that lessons can be learnt ... ".

For as long as I can remember, there have been complaints about the inability of the British rail system to handle bad weather. More recently (1991), we had that famous excuse of the wrong type of snow - now almost 20 years ago. Still they don't get their act together, treating bad weather as if it was some strange, rare act of God that is beyond the wit of man to deal with.

The only trouble is that these same people are endlessly inventive when it comes to reasons why we should pay them more for deteriorating services. In this topsy-turvy world, "learning lessons" is simply a means of fobbing us off with the hope that, in the distant, unspecified future, things might actually improve.

As always, though, we have allowed this to happen. My own "lessons learned" suggest that we definitely need a MAP – a Million Angry People – on the street. I guess that is a Road MAP ... but one with a difference. Until we can do this, the likes of Mr Michael Roberts will continue taking us for fools - and we will be the fools for letting them.