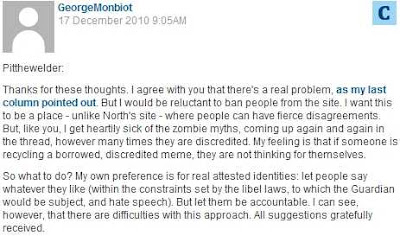 We cannot leave the Moonbat saga without drawing your attention to this superb piece, which points out that the ghastly man is playing games of his own.* Despite his protestations, however, and his false assertions about this site, it is interesting to note that Guardian moderators have deleted every substantive post from "nopressure" and have done the same with the posts from North Jr.  Above and below are a selection of the posts. 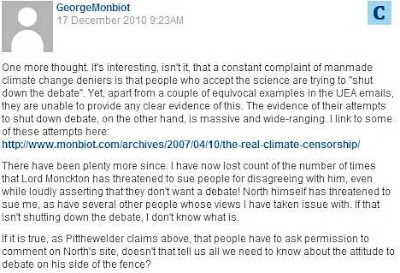 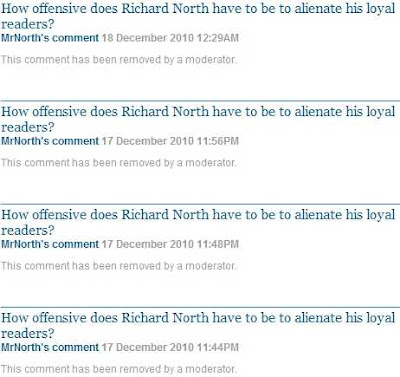 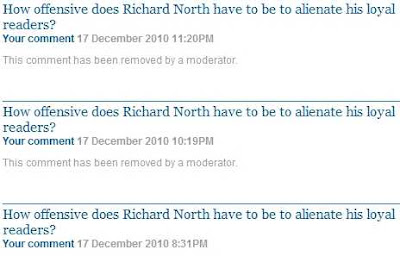 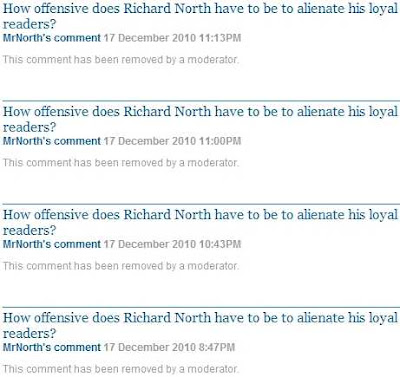 The Guardian's idea of free speech, therefore, is to permit its columnists to mount ad hominem attacks and then prohibit any response. This is the same newspaper which is championing Assange and his Wikileaks, and is up front about the right to leak sensitive material. As always, any direct contact with this newspaper and its writers leaves one feeling soiled.

As for the moronic Moonbat, we have been sent this little note from him, published in the Guardian on 14 February 2005:


It is now mid-February, and already I have sown eleven species of vegetable. I know, though the seed packets tell me otherwise, that they will flourish. Everything in this country - daffodils, primroses, almond trees, bumblebees, nesting birds - is a month ahead of schedule. And it feels wonderful. Winter is no longer the great grey longing of my childhood. The freezes this country suffered in 1982 and 1963 are - unless the Gulf Stream stops - unlikely to recur. Our summers will be long and warm. Across most of the upper northern hemisphere, climate change, so far, has been kind to us.

Now, of course, as the snow lies deep and crisp and even, the warmists are shrieking "weather", while shutting down discourse, and Moonbat's moderators protect him from his own stupidity. But at least we now know how much the The Guardian really values free speech.

As a mirror-image of the same phenomenon, we have a piece from Monckton today, and very quickly we see the comments section infested by exactly the same group of trolls who so consistently attack Booker. The pattern of their frequent appearances and their relentless pursuit of wrecking tactics look contrived, and it is quite clear that the trolls are working in concert.

This amounts to another attack on free speech as, left to themselves, the trolls will drive other commentators off sites and then populate them with their own views.

The tenacity and predictability of the warmists, however, tells its own story. A failing cult, insecure, embattled and incoherent, is losing the plot – and thus making up in stridency what it lacks in credibility. As the snow lies, this is their "Battle of the Bulge" – useless but still deadly.

* UPDATE: Needless to say, a link posted on George Monbiot's comments by its author has been removed by the moderators. Dozens of other comments have also been removed, reflecting the Guardian's determination to prevent anyone responding to Monbiot's charges. The comment thread ends up being absurd, with huge holes in it, marked by the serial deletions. There are some seriously sick minds at work here.