Of suits and spades 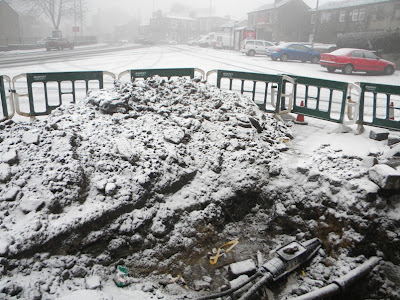 More often part of the problem than the solution, Ofgem is turning round to accuse electricity network companies of putting customers at an "unacceptable" risk of power cuts as they try to maintain Britain's ageing pylons and wires.

Having had Christmas rather spoiled by a six-hour power cut, with lunch reduced to cold turkey (pre-cooked, with no power to reheat it) and mashed potato, we would be the last to dispute this. The village is now reminiscent of a World War I battlefield – holes have sprung up all over the place as the electricity company searched for the faults (one pictured this morning after a recent fall of global warming).

This is the second time this month we have had an extended power cut and now Ofgem has sent a letter to all operators, including Scottish Power, Scottish & Southern, CE Electric and E.ON, threatening to fine operators if they do not improve their services.

In its report, The Daily Telegraph talks of a "worrying sign for investors", because Ofgem is threatening to impose penalties which will have "a proportionate impact on shareholder returns". At the receiving end of the "service", though, is not exactly how we see it – more a question of feeding the ravening beast, while getting less and less in return.

Strongly adding to the "piss-off factor" is the difficulty of actually reporting faults. Attempts to communicate with the utility are referred to a call centre, which elicit denials that there is problem, or a procession of lies, as we are told of mythical timescales for remedies that never materialise. In the end, we talked to the workmen who were just as pissed off as we were, getting instructions from their own call centres, with little sense or coherence.

At the heart of the problem is a service and repair system that has been cut to the bone. While the "suits" on bonuses proliferate, there were two men with spades covering the whole of Bradford, a medium-sized city, throughout the Christmas period. And we were the lucky ones. Some of our neighbours did not get their power back until the next day.

Then, of course, we had another happy little event. With the power cut and then restored, every burglar alarm in the district (installed because of the famous inability of West Yorkshire Met to deal with the burglary problem) went off – a cacophony of wailing and warbling that lasted on and off into the night.

Anyhow, back to Ofgem, which is warning the network companies that they must be quicker about reporting any breaches of their engineering obligations while they work to keep the network in a good state. "We want to raise our concern that the approach being adopted by some distribution network operators to assess their compliance may be exposing customers to unacceptable levels of risk regarding security of supply," writes Rachel Fletcher, Ofgem's distribution partner.

"It is not acceptable to expose customers to significant levels of risk for a prolonged period of time and without having a plan agreed with Ofgem in place to rectify the matter," she says.

We are not sure what exactly that means, other than, at the current rate of progress, all we are seeing is holes in the ground proliferate, while service deteriorates and charges continuously increase. Ofgem should care less about our happy Christmas. But while it may have been a celebration of the birth of Christ, we have to admit that our thoughts on Saturday were (and still are) at the other end of the life spectrum.

Meanwhile, Gerald Warner is extracting his own brand of micturition, the New York Times is being pessimistic, reporting that the next year "offers little cheer for those battling climate change," the Haggis-eaters are turning to the Kermits for salvation and Dellers is on the track of the missing snow.