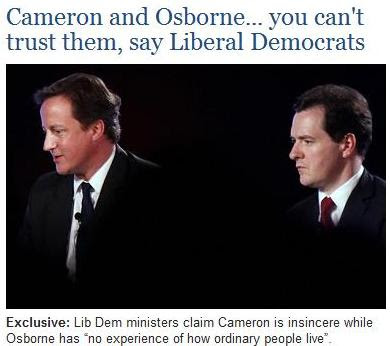 David Cameron is insincere and not to be trusted while George Osborne has no experience of how ordinary people live", Lib-Dem ministers have claimed. Took them long enough to find out, didn't it?

The Daily Mail picks up the story as well. The same Lib-Dims, however, believe that Justice Secretary Ken Clarke is "all right", which might be regarded more as evidence of derangement than a character reference.

Overall though, are we seeing evidence of thieves falling out, in which case could there be the happy prospect of a Cleggeron collapse in the New Year? And was this what Euroslime Dave meant by "new politics"?  With no ideological differences, it all comes down to personalities?