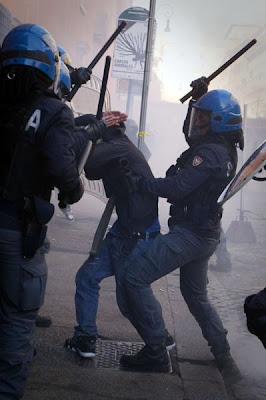 I am taken to task, in a very friendly and informative way by one of our Italian readers for repeating the MSM description of Berlusconi as "scandal-ridden". I might have known that anything the MSM takes as read should be treated with the utmost caution.

Without passing judgement on the man, it is fair to say that Berlusconi has been very successful in his business and political career. But he is an outsider and as such hated by most politicians. And, due to the nature of the Italian political system, he has always had to form coalitions in order to win the elections.

Most Italian political leaders, I am informed, "are of course idiots." I would be the last one in the world to dispute such a claim, but the upshot is that they think that they can make alliances with Berlusconi, use him for winning the elections, and then get rid of him by trickery or court cases and then retain power.

However, it seems that, being the idiots they are, they have always underestimated Berlusconi. As a successful businessman of proven worth, he is anything but an idiot – and also one of those very rare businessmen who have made the successful transition into politics.

So far, therefore, the idiots have lost their battles. Gianfranco Fini President of the Italian Chamber of Deputies and leader of the Future and Freedom party, is the latest in a long line of those who thought he could get rid of Berlusconi without going to the country. And none of the established politicians want elections, because Berlusconi would win by a large margin.

As far as being "scandal ridden", this is as much a reflection of the legal system, as anything. Unable to beat him in the ballot box, Berlusconi's rivals are resorting to legal challenges in a system which is, to say the very least, skewed.

The magistrates, who are at the centre of the challenges, are almost all leftists. At least a quarter, by their own admission, are active leftist militants and can be usually seen at rallies and demonstrations of the left and extreme left. They make no secret of the fact that their ultimate goal is to remove Berlusconi from power, no matter how. They openly declare so in books and interviews. 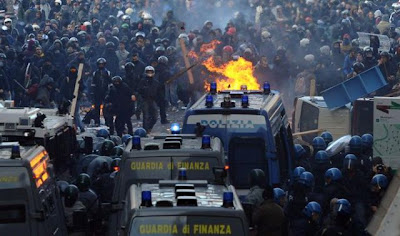 Nevertheless, these magistrates have huge power and privileges. Career (and salary) is automatic and you can reach the maximum grade while doing small claims in a small village. Prosecutors and judges are part of the same career path. Thus, a judge can become prosecutor, and then return to being a judge. This means that the judge who convicts someone in a lower court can be the prosecutor in the appeal trial. It also means that judges usually do not contradict each other. Arrest or search warrants are never denied.

The upshot is that judges are not accountable, and do not respond to any other authority. They are left to themselves. Their salaries are linked to those of MPs and the system is totally self-referential. There is a sort of "mini parliament" responsible for appointments and punishments but this is staffed exclusively by judges. It is regarded as a joke. 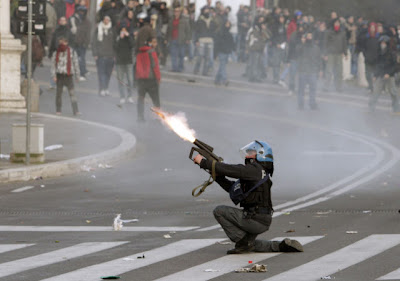 What currently gives them their leverage is that, following a referendum, parliamentary immunity has been removed from the constitution. Thus, the justice system can control the legislators. On this basis, the magistrates have gone to war against Berlusconi, currently launching an investigation against him for "corruption" on the basis that he was looking for votes for the confidence vote. According to the prosecutors, he was promising favours in exchange for support - something surely unheard of in parliaments? That, we are told, gives the idea of the state of madness of the Italian political system.

Berlusconi has made several attempts to change the laws that regulate judges activity. This is described by the media as an attempt to obtain total power. In reality, it is an attempt to put a limit to the limitless power of justice system against legislative power.

The trouble is, though, that parliament comprises two symmetrical chambers. It means every law that is amended in one chamber must go to the other and so on for an endless ping-pong; laws can be stalled forever this way and Berlusconi's attempts to reform the system have been blocked.

Thus, multiple courts in Italy are pursuing still pursuing Berlusconi, but most cases against him are groundless. But with the justice system in the hands of the hard left, it is being used for political purposes. Berlusconi and his companies have been at the receiving end of more than 500 search warrants. They have had to spend over €100 million in defence lawyers.

As to the demonstrations in Rome, these are the usual urban warfare launched by the leftist armies every time there is the promise of a government spending cuts (or promises of a somewhat smaller increase). But this – as here - is the reaction of the privileged when some privileges are going to disappear. 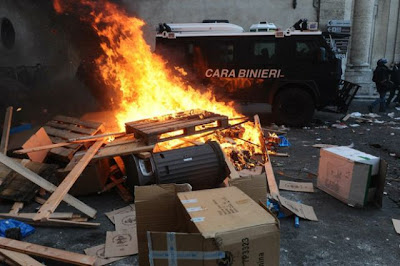 Our informant is in complete agreement with us about the state of the opposition. It is more or less dead, he tells us. Its leader, Pier Luigi Bersani, is a relic of the past, a pathetic figure who is detested and derided by its own people. Thus, incredibly, rather than address the real issues, Italian politicians fritter away their time on their petty power fights, forgetting that they were elected and are paid handsomely to govern the country, at least in the little space left by the EU.

If there are crimes for which Berlusconi is responsible, they are the ratification of the Lisbon treaty and the obedience to any EU demand. Also, the finance minister Giulio Tremonti has gone mad and fallen for the EU project and that would be enough to justify a firing squad for high treason.

And, although Berlusconi is no socialist, the reality is that the power of bureaucracies, of the state apparatus, of the justice system, of the trade unions and ultimately of the EU is such that even the most hardcore libertarian would be unable to change anything in Italy.

As a result, the Berlusconi parliament and government as a whole is only a milligram less socialist than the socialist themselves - not by ideology but by convenience and by culture. Fini is a fascist, or ex-fascist, and despite looking very hard, there seems to be very little difference between a fascist and a socialist.

COMMENT: VACUUM OF POWER THREAD
Posted by Richard at 18:02