The fall of Moscow 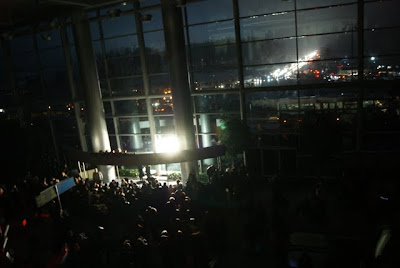 Something that even the 1941 Nazi invasion did not achieve has been briefly imposed by freezing global warming – the closure of Moscow's airports. Reported by AFP and many others, things got so bad that "near riots" broke out as frustrated, cold and angry passengers expressed their opinion of Russian customer relations.

The problems are a particular embarrassment for Aeroflot, we are told. Russia's flagship carrier now operates out of a state-of-the-art wing of Sheremetyevo airport and has made enormous efforts to break out of its dowdy Soviet mold. But state television led its evening news broadcasts with Internet footage of exasperated passengers - many of them scheduled for one of Aeroflot's 153 cancelled flights - banging plastic security containers against Sheremetyevo's floor.

"There is absolutely no information and they just keep sending you from one place to another," growled a young man named Dmitry Menyayev. "People are on the verge of a nervous breakdown," another passenger was quoted as saying by the Interfax news agency.

Interestingly, the problems arose from a spell of freezing rain, which caused a power outage at Domodedovo airport, as well as coating roads with ice and leaving more than 300,000 people and 14 hospitals without electricity in southeast Moscow.

Sheremetyevo airport, on the other hand, blamed cancellations on a shortage of de-icer fluid – exactly the same problem that grounded Brussels flights – but further blamed "a German subcontractor that never provided with its regular shipment of de-icing fluid".

President Dmitry Medvedev has instructed his chief prosecutor to look into the affair, which the Russian media is reporting, and in some detail.

Tensions, The Moscow Times reports, were high late Monday in Domodedovo, where thousands of passengers spent hours with no food or drink except what they had with them and no information on when their flights might depart.

The airport - lit only by candles - suffered a 14-hour blackout Sunday. Some 8,000 people spent a sleepless night on the premises as more than 150 flights were delayed. Departure halls and local cafes at the airport were still unlit as of late Monday, and passengers, many on the verge of hysteria, thronged check-in desks for information on their flights.

An Interfax reporter described the inside of the terminal as looking "either like a movie about revolution or a horror film." Passengers said they had to spend time in the unlit halls without any help or information.

"It was completely dark, everyone was running around and nobody knew anything. I was shocked by the complete indifference of airport officials toward passengers," a blogger, Anna Goryainova, wrote (more photos on this site).

Perhaps Heathrow was not so bad after all, but then our time has yet to come. It remains to be seen how well we manage when the lights go out. But one thing is for certain, if this global warming can bring about the fall of Moscow, we are in for some interesting times.