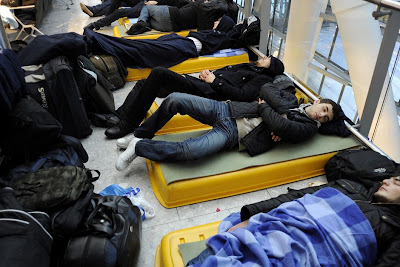 Harriet Sergeant writes an important piece in the Daily Mail, the title: "Have we customers ever been so impotent?" "Like thousands of - others today," she writes, "I am stuck in one place while the people I love and want to be with are somewhere else. In other words, BAA has stolen my Christmas".

Sergeant was meant to have flown to Cape Town to join friends and family. Instead, she had been grounded. But, she declares, "this is not just a story of the weather or incompetence. It is about a far wider issue." She is right, although the issue about which she writes is even wider than she describes.

Rehearsing her own "far wider issue", she tells us that, when she was young, we were at the mercy of state-run monopolies, such as British Rail, British Telecom and British Leyland. But now we are the victims of what she calls the new utilities. Along with airlines, this group includes train companies, mobile phone and computer suppliers, broadband providers and cable and satellite TV firms.

With these "new utilities", Sergeant asserts, the normal rules of the marketplace do not apply. "They know they have become indispensable. Like water and heating, we cannot do without them, and so they abuse their position of power." And they all share certain characteristics, the main one being a stunning indifference to us.

By way of example, she asks: "What kind of company turns off the heating at night in terminals full of stranded travellers? It was so cold people were unpacking suitcases and passing clothes to strangers". Continuing the theme, several more questions trip out:


What kind of company fails to keep travellers informed of what is happening, then locks out passengers who arrived at Terminals 1 and 3 in sub-zero temperatures — on the grounds that they were already packed with passengers going nowhere — and then sets security guards onto them when they protest?

From this Sergeant develops her thesis. "This appalling indifference to customers by large, modern companies is not confined to Christmas. It is a year-round phenomenon," she says.

Every one of us, she adds, has emerged from an encounter with one of these companies — whether it be with an airline help desk or a mobile phone operator's call centre — with the same feeling: that they have a complete disregard for us as customers and, worse, as individuals. "We are treated as part of a herd that has to be controlled, manipulated and, all too often, abused," she notes.

Confronted with these monoliths, Sergeant suggests that the argument that the free market should protect us, as these companies have to compete to provide a better service, doesn't seem to hold water.

These firms either have a stranglehold on a service that none of us can do without, such as BAA with its monopoly over Britain’s airports, or train companies which offer appalling commuting conditions. Or else they are so replete with customers — as in the burgeoning IT, computer and mobile phone industries — that they couldn't care less.

The issue she misses is that this ethos, this corporate indifference, spreads far beyond the "new utilities". We get exactly the same thing from the old utilities – such as the energy companies. And we also get it from the banks, the police, the newspapers, the broadcasters, local government, doctors, the health service, central government and the political parties. Their indifference is their defining characteristic.

However, while in our relations with the authorities, we suffer because there is no choice and the systems of accountability have broken down, with the commercial corporates there is a different mechanism at work. It is not quite as Sergeant puts it, that these companies are "replete with customers".

The essence here is that these giant corporates do lose customers. But since they are all much of a muchness, and they all share a similar arrogance and indifference to their customers' needs, they all lose customers. But they lose them to each other. Thus, we have a huge merry-go-round, with customers constantly on the move. This is called "churning".

The corporates live with their churn rates - they are regarded as normal and acceptable business expenses. They know that customers have limited places to go. What they lose in dissatisfied customers, they will get back from their fellow corporates. Thus they can afford to remain completely indifferent to the fact that we are unhappy with the service we get.

There Sergeant is right to ask: "Have we customers ever been so impotent?" Unfortunately, the answer is, "probably not". And that's just how the churning corporates like it.