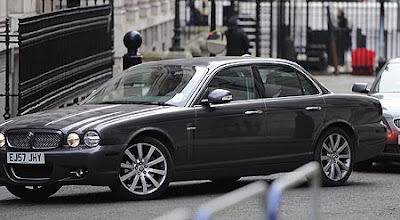 While we are set for some more serious cold, last Saturday, we saw Charles Moore remark that our politics has become more like that of a court than of a Parliament. When electors ask, "Who is our friend at court?", he says, they cannot find an answer.

The man, even from his elevated "above the line" position, is astute enough to recognise the growing divide between "Us" and "Them", although he does not have the wit to understand that Cameron is not going to be part of the solution. He is very much part of the problem.

Another one of "Them" is Nick Clegg, he of student fees fame, who we learn has just been bought at the taxpayers' expense a £300k "bombproof" armoured Jaguar XJ (pictured) to protect him from protesters.

Given the esteem with which politicians are generally held, this is probably an extremely wise decision, although Clegg will find that, eventually, he will have to come from behind the armour and the screen of state-paid gunmen. And people have long memories.

Another man who is soon going to need an armoured limousine is Philip Hammond, the largely inoffensive transport secretary, but now in the front line having to explain why the government is so unprepared for a severe winter that everyone outside the Met Office loop could see coming.

Of course, with his warmist boss and the idiot Huhne in the cabinet, this means that Hammond is hopelessly compromised. He cannot give the real reasons why the system has failed to cope. Instead, rather lamely, he tells us that the government is consulting its chief scientific officer over whether major long-term investment is required. All that does, though, is make him look shifty.

Just how severe the conditions are is illustrated by the experience of Suffolk County Council whose gritters have spread nearly as much salt since November as they used throughout last winter. The county council has used 12,000 tons on the roads since the cold weather began. Yet last year, which was bad enough, they used 14,000 tons. For this year though, their total stocks were only 18,000 tons and with no break in the weather forecast, stocks are perilously low. 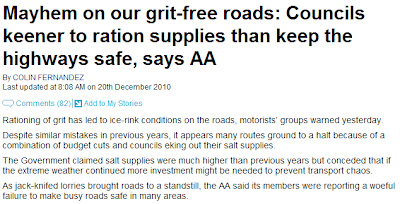 Suffolk are not the only ones running out of supplies. Elsewhere, highway authorities are having to cut back on gritting to keep some stocks available for "strategic routes", allowing ministers' armoured limousines to reach their destinations.

The only way you could get your planning this wrong is if you had completely discounted the idea that this winter was going to be significantly worse than last – and that has been precisely what has been happening. These morons have been listening to the Met Office, then predictably getting it wrong.

Thus do ministers need to retreat behind their walls of armour and gunmen, to protect them from the consequences of their own mistakes and stupidity. Thereby do they increase even more the divide between "Us" and "Them". Perversely, it is us who then have to pay for their protection, and so the disaffection and the divide grows still further.

In the end, they might have found it easier and safer to have done their jobs properly - although whether any of them have the capability so to do is another question.

UPDATE: And guess what is the "most viewed" on The Independent!