There is a God in Heaven 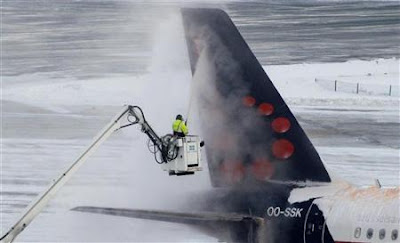 Reuters first intimated that something was wrong, reporting that Brussels airport had said on its twitter feed that it could not guarantee de-icing of planes after 14:00 hrs GMT on Monday due to a shortage of de-icer caused by transport problems in France.

Then we had the Financial Times confirm that the airport had shut down. The airport management, we are told, is blaming the shortage on "heavy usage in recent days", along with difficulties in getting delivery of more de-icing product. Roads in Belgium and northern France have been closed to heavy vehicle traffic. The French supplier of the product is reported to have been affected by the general transport chaos enveloping northern Europe.

Then the Vancouver Sun informs us, via AFP, that new stocks of de-icer will not be available until Wednesday morning. By then, of course, it is likely to have snowed some more, making it even more difficult to get the airport running.

We should not, of course, rejoice in the discomfort of others but, when it comes to Brussels, we are always willing to make the exception. The chaos in the response to the weather is in no small measure the result of intervention by Brussels-based eurocrats – obsessed as they are with global warming. So, as they struggle to get to their homes for Christmas, it is only right and proper that they should experience some of the misery they have inflicted on others.