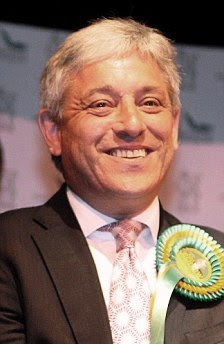 The great irony in the stoods seeking to storm the Houses of Parliament building during their demo last week is that they retain some residual ideas that parliament still means anything. But the same fantasy also appears to afflict Speaker John Bercow.

This dire individual is spending £500,000 of our money on a "parliamentary outreach" project to promote Westminster, a self-appointed task that involves him taking part in more than 20 extremely expensive trips around the country. Such is the profligacy of a project originally costed at £165,000 that even some MPs are beginning to question it, not least Tory MP Brian Binley.

However, when the bovine MPs voted this ghastly man as speaker, they already knew exactly what he was like. It is a bit late now to be complaining that he is an oxygen thief. But then, he was also voted in as an MP at the general election by members of the public, so we rather get what we deserve.

That seems to be another dimension to the equation, where the most dismal of public figures, who should be led to the stocks and pelted with rotten vegetables, seem to have no difficulty getting elected to public office. If democracy is going to work at least tolerably well, then people must use their votes intelligently. There seems to be no sign of that happening.

Speaking of bovine MPs, we learn from elsewhere that a few (too few) Tory MPs are getting a tad hacked off with their leader, not least (but not exclusively) because of his enthusiasm for the warmist religion. These few seem to be on the point of rebellion, set to tell Euroslime Dave where to get off.

It would be nice to think that such a rebellion could actually amount to anything, but the rot has probably gone too far in what was once the Conservative Party for it to make any difference. We are going to have to indulge in our own form of outreach before a real message gets through.

In passing, though, it is worth recalling that the Daily Mail got all worked up about the damage done by the stoods on their demo costing about £500,000 – and here we have with a certain amount of symmetry the Speaker wasting £500,000. In terms, there is actually very little difference. In each case, we are half-a-million lighter. There are, it would seem, as many vandals inside Parliament as out.