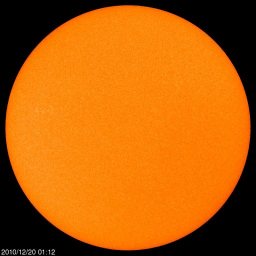 As this month proves to be the coldest December for a century, the temperature in England is set to drop to a record low.

Last night, the temperature in Chesham, Buckinghamshire, fell to -19.6°C. A combination of snow-covered ground, clear skies and the shortest day of the year could produce a sub -26°C thermometer reading tomorrow. The previous record low, -26.1°C set in Shropshire in January 1982, could be eclipsed at an inland area that does not benefit from the warming effect of the sea.

And still the warmists argue that the cold weather "may" be the result of global warming. But then, it could be a Dalton Minimum. Somebody's been using Vim on the sun - it's spotless.