It's a local event 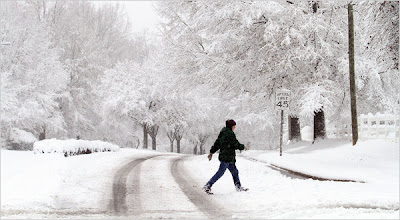 Heavy snow and strong winds have slammed the northeastern United States cancelling hundreds of flights and causing havoc as travellers scurried to return to work after the Christmas holiday. This is according to Reuters, which informs us that the National Weather Service has issued blizzard warnings along the coast from Maine down to New Jersey with winter storm warnings in effect for nearly the entire East Coast.

Maryland, Virginia and North Carolina have declared states of emergency and up to 20 inches of snow are expected in places.

The widespread nature of this event, of course, completely stuffs Julia Slingo the British Met Office's chief scientist. Somewhat forlornly, she is insisting that global warming is still a "reality" despite the bitterly cold temperatures and heavy snowfalls in the UK and Western Europe.

But the Slingos of this world will never let go. They cannot afford to. "Global warming is continuing and we know that from the global trends. There will, of course, be large local and regional variations from year to year. So this event that we're currently experiencing is not unprecedented," she protests.

Meanwhile, snowfall records are falling like autumn leaves in what is being called the "snowpocalypse". The warmists have lost it. Their protestations are now becoming the stuff of comedy, as even the New York Times admits that the blizzards are "rare". And ours is yet to come.