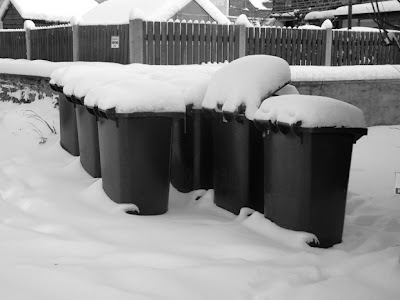 When it comes to public services, one of the great myths is that there ever was a time when the public sector performed flawlessly and rose to whatever challenge it was confronted with. Generally speaking, at the first sign of stress, public services collapse – the above photograph, taken today as mute testimony. The bins were supposed to be collected Tuesday, before we got yesterday's fall of eight inches of snow.

What is different now – if anything – is that the public authorities are more "in your face", demanding more money while delivering less and less . Additionally, of course, with direct relevance to the current situation, they are spending huge amounts of time and our money on their fools' errand of "climate change", while the country grinds to a halt, and the transport system collapses.

Thus, we get Graham Dalton, the head of the Highways Agency - on a nice comfortable £160-165,000 a year (with the salaries of the executive board costing more than £1 million) - telling us to stay off the roads that we have paid for. Meanwhile, we learn that currently only "£160 million is earmarked to help the country deal with bad weather", a tiny fraction of the spend on "climate change".

It is time therefore to recall that fatuous idiot Dr David Viner who so gaily told us in The Independent ten years ago that "Snowfalls are now just a thing of the past".  Then, Viner was a senior research scientist at the climatic research unit (CRU) of the University of East Anglia, from which seat of learning he so cleverly informed us that within a few years winter snowfall would become "a very rare and exciting event". 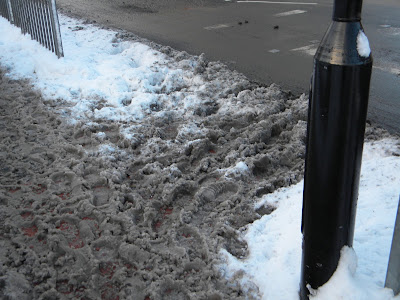 What is worse is that Viner is still on the public payroll, working for the British Council, where he is helping to spend the £2.9 billion of our money allocated by the British government as aid to assist developing countries in "adapting" to climate change – far more than is spent on dealing with the weather conditions here (below - the vista from south Bradford, where not even the bus routes are properly cleared and you don't even dream of seeing the pavements free from snow and slush). 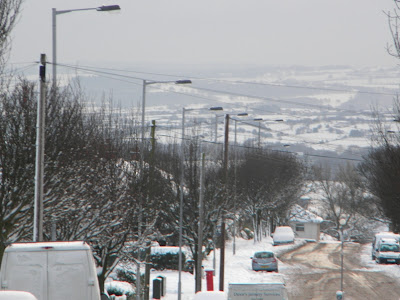 If there was any sense or justice in this world, the likes of Viner would be stripped naked and forced to parade in the snow he so confidently predicted would become "a very rare and exciting event". Then he should be drummed out of office with neither pension nor compensation.

But as long as fools like Viner are rewarded, and we continue to pay for it, then the public stupidity will continue to prevail.  Yet, the existing political parties are not listening - and we cannot rely (and nor should we) on students to do our dirty work.  We need to put a million angry people on the streets.