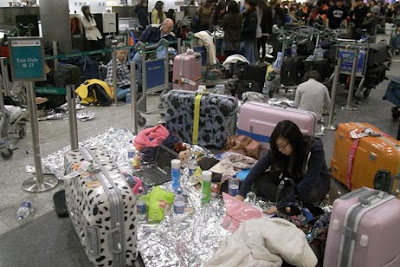 As the chaos at Heathrow intensifies, and it transpires that only £500,000 has been spent on snow clearing kit for the season, a grovelling apology for his crap performance comes from Colin Matthews, CEO of BAA. Delivered on BBC Radio 4's Today programme, he bleats, "I'm really disappointed to have disrupted so many thousands of people's Christmas plans," adding:


It's absolutely distressing and heart-breaking to have been in the terminals and confronted with individuals, each with their stories of really sad and disappointing outcomes. I couldn't be more sorry, that's the case.

Matthews then warbles, "We are going to have to crawl over the details of what's happened over the last few days as soon as we've got the time to do that." Hey ho! Another fatuous "lessons learned" in the making, a precursor to yet another mess. And will even deputy heads roll?

The point is, of course, that even the born-again climate sceptic Boris Johnson has been able to leaven his enthusiasm for warming with a bit of timely populism. Even last February Boris was writing this garbage:


Our climate is changing, with London already experiencing warmer, wetter winters, hotter, drier summers and higher incidences of more extreme weather. To preserve and enhance our quality of life and maintain our status as a leading global city, we must adapt to manage these climatic shifts, which will result in increasing risk of floods, drought and heat waves.Climate change is no distant threat ...

If Boris can change his tune, you might have expected the CEO of the UK's largest airport to have seen this crisis coming.

Nor is dealing with the snow a matter of money. Readers will recall in February, just when Boris was trilling about climate change and the "warmer, wetter winters", we reported that cash-strapped Gordon Brown was buying £60,000,000-worth of "carbon credits" for Whitehall and other government offices in the UK, as well as British Nato bases in Europe.

Then I wrote that, while the rest of the country shivers in the cold, with householders wondering whether they can afford their mounting heating bills – inflated by hidden "carbon taxes" to pay for the carbon emissions produced - bureaucrats in their centrally-heated government offices can keep producing "greenhouse gasses", their emissions paid-for by British taxpayers.

This is the sort thing that should have us marching on Whitehall, stringing up these morons from the nearest lamp posts. £60 million would buy about 400,000 tons of rock salt. As a sum of money, it is more than any one of us will earn in a lifetime, extorted from taxpayers and frittered away.

Yet, no one is responsible. No one is sacked. No one loses their pension. The plebs have a hard time of it, but then they are only plebs - when they've finished suffering, they can pay the bills. Boris the mouth gets a few quid on top of his bunce as Mayor for writing a balls-aching piece in the Daily Failygraph, just to give Louise Gray a break, and the paper writes a soft little whinge. Then everything in the garden is rosy for the slime.

Until the mob kills them.