Snow not an "optional extra" 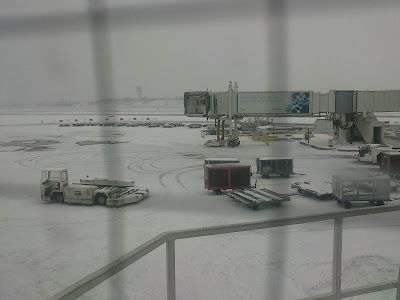 Following the closure of Brussels airport, we get from England Expects the delicious detail that EU commission Vice-President Siim Kallas, responsible for transport, recently commended the airport for its commitment to reducing future carbon emissions.

At a ceremony held in the departure hall of the airport, Kallas presented Mr Arnaud Feist, CEO of Brussels Airport, with a certificate marking its progress under an industry-led carbon accreditation scheme. He larded Mr Arnaud with plaudits, telling him that, "Sustainability is not an 'optional extra' in transport policy. It has to come as standard."

Now Kallas seem to be taking the view that keeping the airport free of ice and snow isn't an optional extra either. Stuck in Brussels and unable to get away for Christmas, he is now telling airport operators - including Arnaud Feist – that they must "get serious about planning for this kind of severe weather conditions."

We have seen in recent years that snow in Western Europe is not such an exceptional circumstance, says Kallas. Better preparedness, in line with what is done in Northern Europe, is not an optional extra, he adds.

You have to laugh.