"Scientists have established a link between the cold, snowy winters in Britain and melting sea ice in the Arctic and have warned that long periods of freezing weather are likely to become more frequent in years to come." This is from The Independent, which cites arch-warmist Professor Rahmstorf. Snowy winters will be about three times more frequent in the coming years compared with previous decades.

This means that the warmists are back in their comfort zone. Having argued consistently that global warming will give rise to mild winters, they now have a framework to explain why they are getting colder - the "immaculate conception" of climate change. The new dogma will be quoted endlessly and unbelievers scorned in the usual insolent way. Armageddon is merely deferred. The religion lives on. 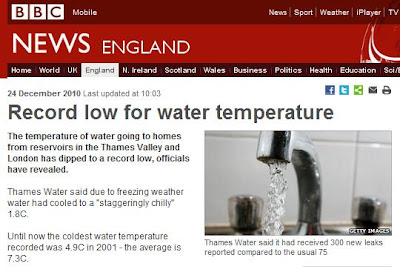 And now that the freezing weather is "officially" caused by global warming, we will be seeing dozens of stories like this from the BBC (above). The reality doesn't matter – nor does the science. They never have. The only thing that counts is that the warmists have a narrative which can be used to support their belief. Rahmstorf has given them that. No further discussion is required.