All deals are off 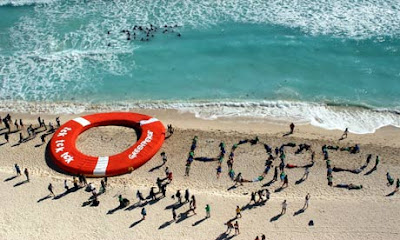 Very much as anticipated, the climate summit at Cancun in Mexico is not going well for the Greenies. The Wall Street Journal does a tolerably good job of reporting what is happening, telling us that the fate of the Kyoto Protocol climate treaty "appeared uncertain". The treaty on the issue has "stalled" amid a stalemate among the US, China, Japan and other nations.

This is reflected in The Guardian, which tells us that "Deadlock over Kyoto means Cancún talks have little to show after two weeks". It adds that: "Cancún climate talks turning into a never-ending global talking shop, say many of the ministers involved". A later report tells us that a $100 billion Jungle Bunny Bribe has been agreed - otherwise known as the "Green Climate Fund" - to be paid over by 2020. No doubt a goodly proportion will be be passed to the Mercedes dealers of the developing world to keep the ruling élites and their NGO pals in the comfort they most certainly do not deserve.

That, it seems, is about the only definitive agreement to emerge from the talks. Even then the idea of the fund is not new - that was agreed in principle at Copenhagen. Only the name of the fund seems to be newly minted, while everything else of substance seems to be on hold until the next summit. There is even a set-back for REDD, in that this has been firmly decoupled from carbon trading.

Around the edges, we also see that carbon capture has taken a hit, while investors are being forced to rethink renewable energy, all of which makes a complete nonsense of any British attempts to reduce CO2 emissions.

By any rational analysis, the global warming scare should be dead in the water – especially after the weather of last week – but we are not dealing with rationality here. The quasi religious aspects of this scare – and the opportunities afforded for creating new taxes and business opportunities – will continue to drive it, long after it should be dead and buried. Thus we find DECC and others working on a scheme to stitch us up with yet more costs on yet another half-baked scheme.

Interestingly, this mess is one of the things getting to Autonomous Mind. Like many of us, he sees that the rules of the game have changed. When our political élites have so lost touch with reality, where the future of our democracy, sovereignty and liberty is threatened and peaceful protest continues to have no effect, direct action is justified. What is good enough for the Greenies and the students must become grist to our mills.

The Daily Telegraph, meanwhile, huffs and puffs about the right to be angry being "no excuse for violence", forgetting of course that the state is also a perpetrator of violence. Its excuse is that it is upholding the rule of law, but when the administration lacks legitimacy, that excuse is increasingly thin. Thus, while "being angry" may not justify violence, state indifference to the basic precepts of democracy is a different matter.

Ripping us off for increasingly large amounts of money to feed their global warming obsession is as near as it gets to a total breakdown of consent and while the current focus - of both the government and the media - is on the students and "yoof", they ain't seen nothing yet. They may be learning a few hard lessons about politics (above) but there is also a different kind of smouldering anger waiting to erupt. The clever-dick commentators may yet find they are looking in the wrong direction - as they so often do.