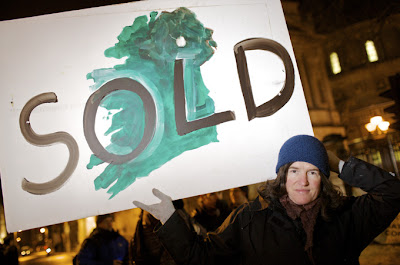 There is a sort of unreality about current politics – and just about everything else, especially what we see in the media which seems to belong to a completely different world.

The reality for millions of people in the UK is the global warming lying thick on the ground – in particular in Scotland. There, hundreds of thousands of people have gone through 24 hours of misery, so much so that Scottish politicians are bickering about the lack of preparedness, while the Met Office is trying to dodge the blame for getting its forecast wrong. That reality is expressed by a Guardian comment:


I'm really angry that they weren't better prepared for the snowfall. The roads hadn't been gritted and I never once saw a snowplough.

I was stuck on a bus from Glasgow to Hamilton. 3hrs queuing at the bus depot, then 9hrs on the bus with a three year old and a baby. We were told there were some delays, but no one thought to mention that it would be so long! Thankfully people on the bus had milk in their groceries and people were coming out there houses with biscuits handing them round cars. My couple hour trip into Glasgow turned into a 28hr trip in total.

People shouldn't have to sleep in their cars, go without food, water, or toilet facilities, because the roads weren't gritted.

The further reality is that the Daily Mail and others are warning that we can expect the global warming to move south by morning, where we are similarly unprepared. A lot of people are going to be trying to carry on with their lives, yet will be struggling to deal with the collapse in the transport infrastructure that happens every time the temperature falls.

Yet none of this registers on the political horizon – still less the prospect of massive energy bills being stacked up, with the UK drawing down record amounts of power, the system increasingly at risk of failure. As far as the politicians go, this makes no one whit of difference to what passes as their thinking as they sit idly by as we are poised to run us out of electricity and money. Their reality is the prattle in the press.

Also failing to register with the impact it deserves are the rumblings coming out of Germany about the euro, and the budget situation in Ireland. There, the Irish government has won the first parliament vote on its 2011 austerity budget, but the drama is far from over. It is going to be until Thursday evening before we see the shape of things to come and, according to some sources, the process is not expected to be wrapped up until early next year.

The distance between "our" reality and what the media and the politicians are trying to tell us are important is now so great that it is getting harder and harder to relate to what they are telling us. This is seriously and disturbingly bizarre.