Greeks on the boil 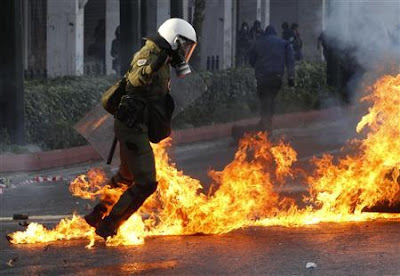 Not content with allowing the Italians to grab all the limelight, the Greeks are back in the news with an entertaining riot of their own. But what is particularly interesting to see is a former transport minister being recognised and stoned as he left parliament. Too often, the politicians skulk behind their barricades and armed guards, while the police take the heavy stuff.

In this case, abut 200 leftist protesters chased Kostis Hatzidakis as he left parliament, shouting: "Thieves! Shame on you!" They threw stones and beat him with sticks, until he took flight into a nearby building. With Charlie boy in this country now resorting to his armoured Bentley, we are not far from the day when even the lowliest MP will need an armoured vehicle for transport. 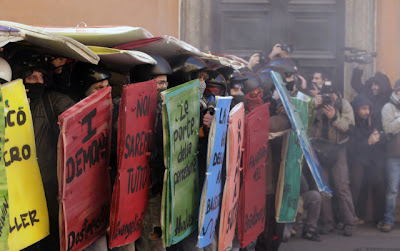 Reviewing the general footage of the Greek "demonstration", it is interesting to see the widespread use of petrol bombs or "Molotov cocktails" (top), and these certainly seem to be one of the more effective tools in the protesters' armoury. But we also seen the Italians using their placards to effect (above) – rather akin to the Roman Legion "tortoise", which is rather appropriate.

This is what the idiot police (is there any other sort?) and the cowardly politicians do not seem to realise – that if there are real grievances, cracking down on protest simply leads to an escalation on both sides. One expects, soon enough, to see these Continental tactics at play in the UK, and this is how it all starts.

Meanwhile, Conservative Home is on the ball, as always. Or, as the man says, "never knowingly fails to disappoint".