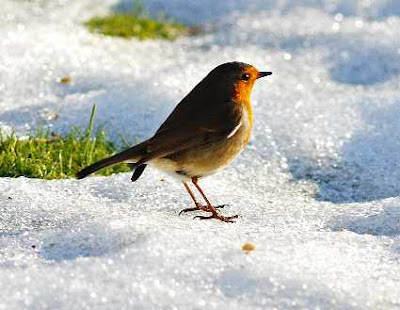 ... to all our friends and readers, and especially to those who found their way to the "donate" button during the year. I didn't realise we had so many fans working for "Big Oil" but, through their generosity, Mrs EUReferendum has kept the bath well-filled with coal. What's more, we've even had a few tripe butties and the odd crisp and salad cream teacake.

'Appen, today's official forecast is for fine weather, so she can tek a break from shovellin' t'snow off backyard. Once she's broken ice int' wash tub, and tekken in the washing, she'll 'ave plenty of time to polish the doormat and shampoo t'whippets. Then she can roast the squirrel fer Christmas dinner, fer when her old man gets back from pub. It's shaping up to be a reet grand day.

That'll give me a chance to stop pretending to be a stage Yorkshireman, which doesn't come easy for someone who was born and bred in North London and only travelled to the wrong side of the Wash to export some civilisation to the lost regions of England.

Whether it actually snows today depends, I suppose, on Piers Corbyn. Contrary to the official forecasts, he is labelling the period 25-31 December a "Weather Action Red warning (World)" period with top activity expected in sub-periods 25-27th and 29/30th December. With the Met Office reputation at an all-time low, and Booker planning a demolition job for tomorrow, getting it right could make Corbyn's reputation once and for all.

There seems less uncertainly in Chicago, where snow accumulations yesterday ranged from 3 to 6 inches, and they are confidently declaring a White Christmas. The Chicago Weather Center says it has been 13 years since an inch or more of snow has fallen on Christmas Eve, and 59 years since 4 inches or more fell on 24 December.

Two inches of snow have also fallen in parts of Minnesota, but that did not stop the "holiday procrastinators" from going out to buy gifts on Christmas Eve. And the same snow belt is headed southeast, expected to bring rare Christmas Day snowfall to Kentucky

After dumping 9 inches of snow in Iowa by Friday morning, the storm was likely to dip south into Tennessee and Georgia today, then perhaps move north Sunday. Winter weather advisories were in effect from Kansas east to Kentucky and from Minnesota south to Arkansas yesterday.

Making a mockery of the claim by the British Met Office that the cold in Britain and Europe is a local event, we have also seen more than 300 people in north China's Inner Mongolia Autonomous Region stuck in a traffic jam after snowstorms blocked a national road. More than 100 firefighters and police officers and 20 rescue cars had to be rushed to clear the snow and rescue the trapped people, amid extremely cold weather with temperatures 30 degrees Celsius below zero.

Tianjin Municipality on Thursday received its first snow this winter, forcing transport authorities to close 11 highways. The temperature in Peking was around six degrees below freezing Thursday morning, a drop of 12 degrees Celsius from the same time the previous day.

Cold conditions are spreading to northern India, with mercury hovering around freezing point in several parts of Himachal Pradesh and Jammu and Kashmir. And in St Petersburg, they are mounting icicle patrols in a bid to stop people being killed by falling ice.

But there's no need to worry. Once the global warming really gets going, billions will die. Human civilization will be reduced to a "broken rabble ruled by brutal warlords", and the plague-ridden remainder of the species will flee the cracked and broken earth to the Arctic, the last temperate spot, where a few breeding couples will survive.

That was James Lovelock in February 2006, so I guess it will not be long now. Enjoy your Christmas while you can. You might be having to share the next one with the polar bears.