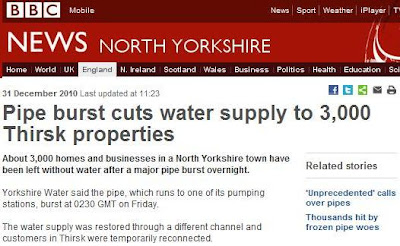 Rather than expand the original thread, I'm going to continue the discussion here. The condensing boiler issue certainly seem to have struck a chord and I'll continue on that. But we also see that the water situation is deteriorating. It is not just Northern Ireland, but my favourite company (not), Yorkshire Water, is having a torrid time.

As well as North Yorkshire, and Thirsk in particular – where it was especially cold, Sheffield has been badly hit, Bradford is having its moments, and the residents of Hull and East Riding are being asked to ration water. Outside the Yorkshire area, Wales is recording the "worst water supply problems for 30 years", and The Daily Express is telling us that "tens of thousands" of people have been left without water.

One might have some sympathy with the predicament of the water companies as they battle to overcome the devastation caused by the "unprecedented" weather, except for the fact that they have been frittering away their time and our money on climate change.

On top of that, as our own readers remind us, the capital spending on water has been heavily distorted by the often absurdly over-the-top requirements of the EU water directives, spending which now totals over £65 billion, against only £14 billion left for infrastructure.

Water leaks and now water cut-offs might not seem political, but they surely are. Between EU madness and the government obsession on global warming, at the very least we can say that they have left us unprepared. And you can now bet that the water companies will be coming to us again for yet more money, to add to their already inflated bills.

And what do you think our over-paid MPs in Westminster might say about that? And that's what politics is really all about. Everybody out there seems to have their hands out for one thing or another. On top of the water bills, energy costs are going up, petrol is going up, VAT is going up, inflation is going up – the inevitable consequence of "quantative easing" – and no end of families have had to pay unexpected call-out fees when their boilers failed.

Jeremy Warner in The Daily Telegraph thus writes, "For many, it'll be a very unhappy financial new year," predicting that, "It will only need a small nudge to tip some households into destitution". He is not wrong, and not a little of this is simply because MPs past and present have not been doing their jobs.

COMMENT: OPEN THREAD – THE STUFF OF POLITICS
Posted by Richard at 14:20