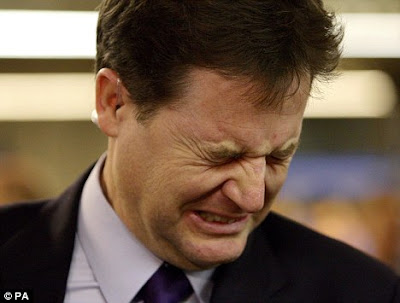 In the tiny, foetid world of Westminster politics, where the rats are too well-paid to jump ship, passions are stirring and stresses are building up.

Despite growing unpopularity, the Cleggerons – or unidentified factions therein - want to acquire an electoral identity and put up candidates at the next playtime. Others, who still have some ambitions of being Conservatives, want to go it alone in the expectation of being able to acquire a majority vote.

The boys and girls in the playpen, however, have not yet realised how loathed they are, and that the majority of the country is entirely indifferent to their petty scheming. Short of a revolution, the population will probably not begin to take an interest until the current party structure is ripped apart and new alliances are created.

What has to happen here is that the Conservative Party splits. This has been on the cards for many years, but now it really must happen. Then, the soggy, centre-left under the leadership of the Cleggerons will form its own party, reinforced by soggy, centre-left elements from Labour.

The new, nationalist "right" will then form an alliance with UKIP (or steal its votes), while the "left" will join up with the greens to form a blud und boden national socialist alliance, where the intolerance already displayed by its members will thrive.

One can then see the new alliances squeezing the Cleggerons into oblivion, and real politics returning. It will be messy, and won't be at all pretty, but it will be more honest than the faux consensus on offer. Until then, who cares wins?