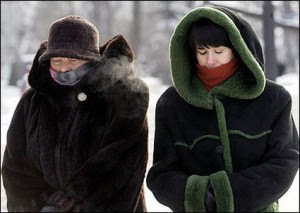 This, of course, used to be a huge joke. But we didn't know we were going to have to die laughing.

Meanwhile, British global warming continues apace with the Daily Mail telling us that the cost to the economy so far this winter is £4.8 billion … and a further £8 billion to come if more snow materialises. I don't know where they get these factoids from but, if the figures are correct, then the warmists have been looking in the wrong direction. Now there's a surprise.

Talking of warmists, the moronic Moonbat is back in town, spraying indignation about this blog around like it was global warming. How touching it is that he cares so much.

Interestingly, there was at least one of the commentariat who jeered about the lack of comments supporting North. However, there was one, from a poster with the username "No Pressure". It said:


It is quite interesting how the Holy George gets all worked up about North using the term "jungle bunnies" but was so silent about the 10:10 campaign which depicted blowing up schoolchildren because they did not believe in the global warming campaign.

Had the HG explored the issues a little further, and got his head round them, he might have been aware that the 10:10 campaign was being deliberately provocative, aiming to shock as a way of getting the message through. This was thought (by the 10:10 campaign) to be a perfectly acceptable way of doing things.

HG then might have stop to think whether North is doing exactly the same thing. If there is one thing that gets the left-wing groupescules worked up, it is perceptions of racism - although, interestingly, only in the white man. Jungle Bunnies are perfectly in order when they display the most severe form of racism and indulge in ethnic genocide. That is OK ... as indeed is depicting the blowing up of schoolchildren.

The great irony (and we know that warmists don't "do" irony - it is above their pay grade) is that, if this was North's intention, he has succeeded. As one of the few truly independent bloggers, without a newspaper to hide behind, his hit-rate is not only respectably high but increasing.

Moonbat blog readers, however, will not be able to respond to this comment. It has been deleted ... although it has now re-appeared under the username "mrfleming". It will be interesting to see how long that lasts ... which turns about to be not very long. However, another replacement appears.

And, after several other deletions of other posts by the site moderators, this further comment has been posted by "nopressure":


Richard North could come to CiF and tell us what his intention was with his original jungle bunny comment, and then we'd know. Given that his website edited the first article to remove the phrase I guess (and North jnr confirms above) that they realised it was not an appropriate phrase to us.

It would not really matter what North said on this site, so it would be best for him not to bother. In any case, his username, Spacedout, is subject to premoderation. Life is too short to play those games with the moderators. As it is, it is largely a waste of time trying to make a sensible contribution to this site as any really telling points are invariably deleted by the moderators. As I said, life is too short.

In answer to your comment, as so often you make assumptions (guesses), and as so often your assumptions are unfounded. North Jr suggested removal of the first reference to Jungle Bunnies in order to avoid having to deal with the unpleasantness of the warmist lobby. This, as he rightly says, was done before any awareness of the LFF post, which - given their triumphalism - again demonstrates how easy it is to make unfounded assumptions and to base false accusations on them.

However, my understanding is that, having researched the meanings and origins of the phrase "Jungle Bunny", it was felt that there was sufficient evidence of usage to sustain an argument that it could be applied in a non-racist sense, not least the evidence that the term has a history of use by blacks against other blacks. Also, given the etymology of the word of the word "jungle" - particularly the sanskrit derivation - and its moral dimension - it was also felt that it could be applied in the context without necessarily taking on a racist meaning.

On that basis, and in the expectation that it would be mis-represented by the warmist lobby, it was quite deliberately used as bait ... hooking a far bigger prize than expected. You can infer what you like from that, and dispute what you like. As North Jr indicates, neither he nor North Snr give a toss what you or any of the other warmists on this site think. But they know that Moonbat has been well and truly had, confirming himself as a small-minded idiot, relying on ad hominem while decrying its use.

The comment is not expected to survive the attentions of Moonbat's faithful moderators, who are doing their best to protect him from the consequences of his own stupidity. Thus, if it illustrates anything, it confirms once again that it is impossible to argue sensibly with warmists.