Not waving but scrounging 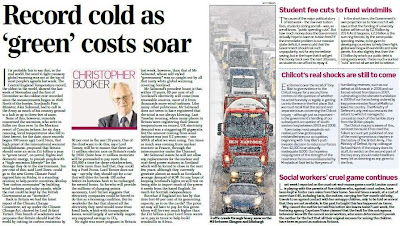 The starkest fact of the week - according to Booker - is that, while the stoods are being stuffed for £2.9 billion to keep the education budget down, £2.9 billion is precisely the sum we are being forced to dole out to the jungle bunnies so that they can buy windmills, solar panels and new Mercedes cars for their rulers and their entourages.

Since all these stoods are dead keen on saving the planet and being nice to jungle bunnies, they surely can't possibly object to paying up to £9,000 a year for their degrees. They must, therefore, agree to the sacrifice if it means that they are making a contribution to slowing planetary heating to 3.2 degrees instead of the fantasmagorically super-critically dangerous four degrees that we would achieve otherwise - if Messrs Gore, Jones, Mann et al are to be believed.

But then, as Booker also points out, we are all going to have to sacrifice if we are to reach this massively important target, so we can hardly complain if that wonderful Lord Stern is inventing even more delicious ways of relieving us of our cash, while at the same time making sure that we save energy by having to sit in the dark for prolonged periods as the electricity runs out.

On the other hand, some of us might actually find this cash deprivation exercise as offensive as others find our use of the term "jungle bunnies". But then, I reckon that if we are being forced to contribute so heavily to their wealth and wellbeing, we have earned the right to label our beneficiaries as we please. Beggars can't be choosers.

If they want to stand on their dignity, and demand more "appropriate" descriptions, then they can buy their own damn windmills ... and limousines. Me, I'm just getting a little fed up with the idea that we have to smile sweetly and be ever-so-polite while the scroungers of the world unite to rip us off. Respect is a two-way street.