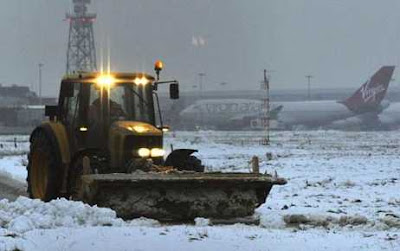 Weather in any one winter is virtually independent (statistically speaking) of weather in preceding winters. And, despite there having been three severe winters in a row, there is only a 1:20 chance of there being a severe winter next year or in any subsequent year. In other words, bad winters cannot be considered an annual event.

This is the view of the Met Office, passed to the Quarmby Review which has been charged with auditing its own recommendations on improving the transport system's "resilience" to severe winters. The audit was commissioned by transport secretary Philip Hammond on 2 December, and carried out by David Quarmby, chairman of the RAC Foundation and a former chairman of the Strategic Rail Authority, with his team.

Furthermore, says the Met Office to Quarmby, the incidence of severe winters is slowly declining due to global warming, although one important effect of global warming is that more snow is possible when severe weather events do occur.

To an extent, this is a "get out of jail free" card for the politicians – if they care to take it. Quarmby is part buying into the Met Office, effectively agreeing that severe winters are random, unpredictable events. But there are also caveats.

Even if severe winter weather has a low probability of occurrence, and there appears to be no evidence to support "clustering" of severe winters, Quarmby says that the government "should recognise that there are opportunities for additional resources to be committed to winter resilience in England". Then it is Hammond who accepts that benefits can arise - but there is also the risk of limited or no value when winters are average or mild.

The bizarre issue here is that the Met Office seems to want it both ways. It tells us that it can predict global warming – that it knows, for instance, what the climate is going to be like in 60 years time. But it will not allow clustering. And therein is a problem. If there is only a 1:20 chance of a severe winter, what are the chances of three 1:20 events happening in succession?

Interestingly, last year – at the height of the winter cold - the Great Moonbat opined that the ability to distinguish trends from complex random events "is one of the traits that separates humans from the rest of the animal kingdom". It is also, he said, the basis of all science; detecting patterns, distinguishing between signal and noise, and the means by which the laws of physics, chemistry and biology are determined.

Referring to those who sought to draw conclusions from the run of bad weather, he complained that we were being asked "to commit ourselves to the wilful stupidity of extrapolating a long-term trend from a single event." Even then, though, we had had two such events. Now, when we get three such events in a row, we are not allowed to see a pattern or a trend.

Each warm winter is evidence of global warming. Together they comprise a trend. Three cold winters in a row, are simply the coincidence of random events. The difference, of course, is that a warm event confirms expectations, three cold ones confound them.

For the moment, the Met Office is holding the line, but for how long? There is a one in twenty chance that next year is as bad as this one … maybe. But what are the chances of four bad winters in a row? Whatever the odds, the stakes are even higher.