Another step in the slow process of integration 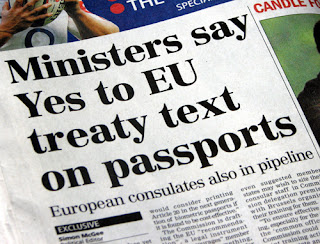 The Yorkshire Post is running an exclusive this morning, telling us that "British passports face yet another European makeover" after the government agreed with proposals from Brussels to stamp them with passages from the EU treaty.

Says the newspaper, "Under contentious plans for a huge expansion of the EU's involvement in representing member states and their people abroad, it has emerged the European Commission wants Article 20 of the treaty to feature in each and every passport to remind people of their rights as "EU citizens".

This is, in fact, a "green paper" slipped out in November last year, under the deceptive title: "Diplomatic and consular protection of Union citizens in third countries", COM(2006)712 final, the very term "green paper" implying a tentative discussion document.

But green, white or sky-blue pink, the Commission is using this as a launchpad for another step forward in the integration of consular services, all with the eventual intention of creating a single European diplomatic corps, with EU representation abroad, rather than individual national embassies.

In its march towards this end, the Commission complains that the current Community acquis is fairly slim, something which it intends to remedy, by creating a whole raft of new legislation which will permit the establishment of EU consulates - the Caribbean, the Balkans, the Indian Ocean and West Africa are suggested in the first wave.

With these set up, the EU is ever so kindly offering to take over responsibility for day-to-day consular duties from individual member states, issuing passports and visas on their behalf.

To that effect, it is suggesting that EU member state nationals should be "deputised" to act for other governments – all under the EU flag – and is proposing that there should be standardised training for what are quaintly termed "common offices". 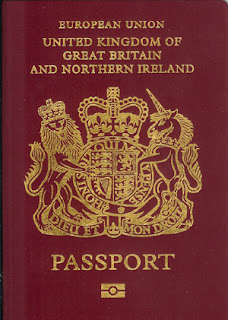 All of this is done under the label of "helping the European citizen", stressing their "entitlement" to protection by the authorities of any member state represented on the spot that they happen to be in. And this is because – or so the Commission says – that "citizens want the European profile to be raised." Printing Article 20 of the current treaty in passports is, the Commission believes, "an effective way of reminding citizens of their rights."

The point is, of course, that these measures are being proposed under existing treaties yet, even as of December 2000 when the Nice Treaty was agreed, had we then argued that this would lead to the establishment of a chain of EU consulates and a new passage in our passports, this would have been scornfully dismissed by the likes of Richard Corbett as another "Europhobe myth".

Yet, here we are with the proposals firmly on the table, and the planning well advanced, all on the basis on a five-line article in the Nice Treaty. What lies in store for us in the new treaty, we can only guess but past experience – as here – tells us that, the moment there is the tiniest crack in the door, the "colleagues" will exploit it to the full.

Whether or not there is a major transfer of "sovereignty" in the new treaty, therefore, is not the point. The real issue is that this is another treaty in the long process of treaties which will accord more powers, and more opportunities for integration. The EU will exploit those opportunities to the full, in ways that, at the moment, we can only guess at.

It really is time to call a halt to this process. That is why a referendum is so necessary, and why, of course, the "colleagues" are so opposed to one.