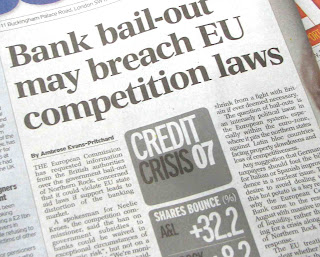 Confidence is a delicate thing. And, if the savers are no longer queuing at the doors of Northern Rock, it is only because there is enough residual trust left in the government to believe, for the time being, Darling's promise that the taxpayer will underwrite the finances of the bank.

The last thing in the world we – or the Northern Rock savers – need, therefore, is the cack-handed intervention of our real government, outlined by Ambrose Evans-Pritchard in today’s Telegraph (Business section).

Under the title, "Northern Rock bail-out may breach EU laws", Ambrose tells us that the EU commission "has requested information from the British authorities" over the government bail-out of Northern Rock, concerned that it could violate EU state aid laws if support leads to distortion of the banking market.

A spokesman for Neelie Kroes, the competition commissioner, said the ban on government subsidies to banks "could be waived" in exceptional circumstances of "systemic risk", but not on a long-term basis. He adds:

Where there is support, it normally has to be limited to six months' duration and made available on commercial terms. If the duration is more than six months, then it has to be considered as restructuring aid, so restructuring has to take place. 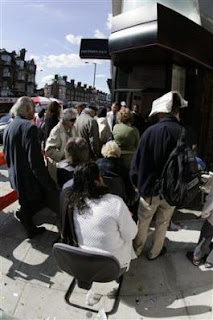 So far, it seems, the commission (i.e., our real government) appears satisfied that London "had acted within reasonable bounds" but one thing our Chancellor did not make clear was that his guarantee to Northern Rock savers is (perforce) conditional – and time-limited.

The "conditionality" is that any guarantee made is valid only insofar that it conforms with EU requirements, for the time period in which it is allowable.

For the rest, this is technical detail. If Northern Rock savers come to the conclusion that, at any time, the EU can pull the rug from under our own (provincial) government, then we may see queues re-forming outside the bank offices – and this time there will be nothing that can be said which will turn them away.

Sentiment is not helped by Charlie McCreevy, the single market commissioner, who is saying, according to Ambrose, that the issue "must be tackled urgently", at the same time cautioning against "easy bail-outs". This could be taken to mean that commission action could be imminent (and unpredictable).

If I had any money in Northern Rock (or any money at all), I would be very worried.