It's The Sun wot's doing it 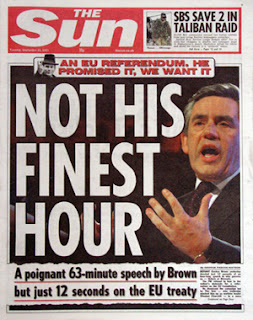 The Sun is in full cry on day two of its campaign for a referendum on the EU treaty. No half-hearted plea this, the paper takes Brown on with a brilliant, full-frontal attack, devoting its whole front page to a pointed sneer, with a two-page spread on pages 4 and five and a full-page leader.

And, on each of the pages where it covers the Labour Party conference, it has a little inset, showing the iconic Brown in his "Churchill suit", giving two fingers to the nation. This is conviction journalism at its best. We could not ask for more.

His speech, lauded by the BBC and laboriously dissected by the chattering media classes, was summed up in one pithy phrase: "A poignant 63-minute speech by Brown but just 12 seconds on the EU treaty". 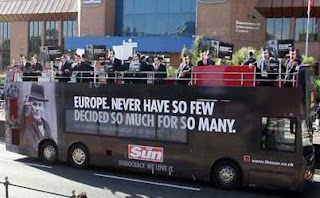 Putting its copious funds where its mouth is, The Sun has also hired a "battle bus" (pictured), plus a fleet of vans, to spread the message on the beaches of Bournemouth, complete with a bevy of "page 3" girls to convey the message in their own fashion.

Says The Sun, "Cabinet ministers looked on amazed as our Winston Churchill lookalike and 20 sidekicks in Gordon Brown masks took the Labour Party conference by storm," adding, "…echoing the real Winston's defiant World War Two message, the PM was left in no doubt we will NEVER surrender in the battle to give ordinary people their say."

The paper also offers a download of its inspired "two fingers Brown" pic, which we will be putting on our sidebar and we will offer the code shortly, with a clickable link to The Sun petition.

"Our battle for democracy", the paper concludes, "was backed by people on the streets of Bournemouth." Not only in Bournmouth. Well dun The Sun!

UPDATE: We have produced a panel link to the petition, now posted on the sidebar (see left). We have also spoken directly to The Sun suggesting they produce a more professional version. In the meantime, if anyone wants the code for this one, contact us and I will send it to you by e-mail.