Cracks in the "non-imperial" Empire 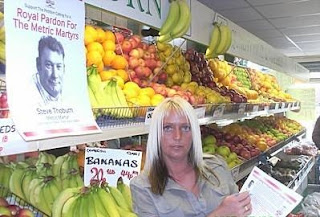 We missed a huge opportunity when, in July, commission presidente Barroso declared that the EU was the first "non-imperial" empire. That should have cued the immediate response, that it was therefore, the first "Metric empire" – which indeed is its aspiration.

However with a press release from the commission we are told that this Tuesday sees the end of the "metrication saga" that has been drawn out for over four decades. The commission will be granting the UK a permanent right to maintain imperial measures along side of metric measures.

This refers to the derogation to Directive 89/617/EC (amending Directive 80/181/EEC) which currently permits the UK to allow the use of what are known as "supplementary indications" alongside compulsory metric markings on goods sold.

That derogation was due to expire on the stroke of midnight on 31 December 2009 whence – with UK Regulations already in place – it would have become illegal to display even the Imperial equivalent of metric-labelled goods on sale. That, in fact, is still the case, until the Weights and Measures (Metrication Amendments) Regulations 2001 are repealed.

However, the commission is keen to tell us that the metric debacle is "nuffink to do wiv us, guv". It states that the UK government opted to change to metric as far back as 1969 (long before joining the Common Market in 1973) "at the request of industry", with the UK metrication board being set up, then adding that the first moves by government were in 1864.

These, as always, are half-truths. There was indeed a small caucus in the UK campaigning for metric measurements but, equally, the then EEC was keen to see a standardisation of units of measurement throughout the Community.

Anyhow, as we observed over two years ago, the march of metrication had become a singularly unpopular policy and, in the fullness of time, would contribute hugely to the unpopularity of the EU, to which effect we were rather looking forward to the outcry when, in 2010, Imperial measures were banned altogether.

Clearly, the commission has understood the perils of this move, hence its retreat – an interesting reflection of the insecurity of our masters in Brussels. Even they are beginning to realise that there are limits to their power. 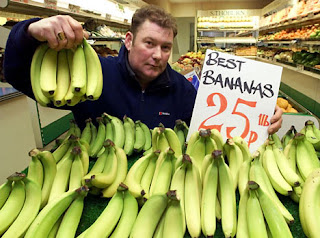 Needless to say, the BBC is ramping up the issue and other media are following in its wake – many claiming this to be a "victory" for Neil Herron and the Metric Martyrs, including the late Steve Thoburn (right) and his widow, Leigh (pictured above). And indeed it is, except that it is a very small victory - all we get is a continuation of the status quo.

Metric measurements as the predominant units, are still compulsory – and traders are still being prosecuted for selling goods in Imperial. All that has happened is that, by the grace of our masters, traders are allowed to offer a translation of these foreign markings.

However, there is now scope for enormous confusion. The commission is writing of the "myths that surround this issue". The tabloid press, is says, "have repeatedly and erroneously printed stories about the great British pint being under threat, miles being abolished and people having to buy their foods from the markets in kilos rather than pounds."

It then adds, "Those who were worried such as the 'Save the Pint' campaign and the Metric Martyrs can rest easy and the more importantly the UK public will not have to put up with any more rumours and myths."

From that, you would get the impression that we can now buy foods sold in "customary units", but this is not the case. It seems that the commission is in the process of creating some myths of its own.