No ducking or diving 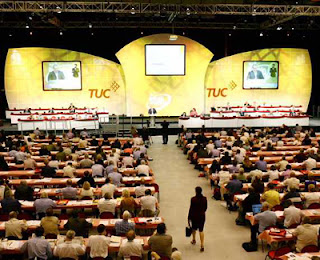 Despite my cynicism, the unions have actually delivered the goods and yesterday voted for an EU referendum at the TUC Congress.

As The Daily Mail reports, from there being deals in smoke-free rooms, union leaders took the issue head on.

Colin Moses, from the Prison Officers Association, said: "We have had a belly full of broken promises and what we have here is another broken promise. Promises should not be made in the heat of an election, they should be kept and they should be brave enough to go to the people of this country and ask them." He then added, for good measure, "And if they say 'no', that should be the answer."

Bob Crow, general secretary of the RMT, was equally robust, declaring, "If it is good enough for the Irish to have a vote in a referendum, then it should be good enough for British workers. We should have the arguments and a full debate. People should be able to decide their own destiny."

Paul Kenny, general secretary of the GMB – one of the biggest and most powerful unions – then told delegates that the government had made an election pledge to have a referendum and that the treaty was fundamentally the same thing. His view was that, "The proposed treaty clearly falls within the promise made by the Government to the electorate at the last election. To refuse to honour this by means of ducking and diving may cost the Labour Party at election time."

Thus did The Times report that the unions had dealt a "sharp rebuff" to Gordon Brown. Although they stopped short of also pledging to campaign for a "no" vote, it was made clear that, if the government does not change its position on the Charter opt-out, they will join any "no" campaign.

According to some reports, the vote came as it emerged that Britain was embroiled in "emergency talks" in Brussels to ensure that the ECJ would have no jurisdiction over foreign policy. Ministers, we are assured, are concerned that the new treaty has been "watered down", omitting a key passage which states that member states retain full control of its foreign policy.

However, the Daily Mail reports "suspicions" that the row may have been deliberately manufactured in a bid to show Mr Brown standing up for the country's interests. Once again, our respected and revered prime minister, it seems, is playing games.

Holding the line was enterprise secretary John Hutton, who insisted that the government would not cave in: "I would rule a referendum on this treaty out. Yes, for sure, because this doesn't fundamentally affect our constitutional relationship with the EU," he told BBC Radio 4's World at One.

He appeared to be undermined by Europe minister Jim Murphy, who told the Commons Foreign Affairs Committee that the Bill to ratify the new constitutional treaty that emerges, "should be drafted in a manner that allows MPs to table an amendment proposing a referendum." Although the BBC thought this gave the government "wriggle room", it is probably a pre-emptive move to circumvent the Lords - who most certainly would introduce an amendment - thereby giving the government procedural control and staving off a blockage in the Upper House.

Meanwhile, the dreadful Ming Campbell, who heads a party called the Lib-Dims, has decided – after consultation with his Europhile Peers – that the constitution isn't really a constitution after all and, therefore, his party will oppose a referendum. The Parliamentary party is, apparently, less happy, leaving room for individuals to rebel.

With the unions avoiding the ducking and diving that usually goes on at TUC Congresses, therefore, the pressure on Brown can only intensify. The Labour Party relies on £17 million annual donations from the unions, and it remains to be seen whether he can ignore the tune being called by his paymasters.