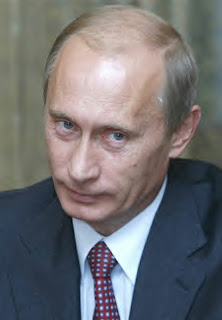 Bafflement greeted President Putin’s latest performance, which is, in fact, a repetition of something that happened last time. In March 2004, just before the last presidential elections, President Putin dismissed his government and appointed Mikhail Fradkov, an unknown bureaucrat to the Premiership.

Fradkov, who has now laid down his career for his leader and will be awarded something or other as a consolation prize, had been Director of the Federal Tax Police and in 2003, Russia’s representative at the European Union. His appointment was greeted with satisfaction by European politicians (most of whom have since disappeared without trace except for Chancellor Schröder) as Mr Fradkov was viewed as someone who would probably be friendly to “Europe”.

President Putin had made the changes in question, as he explained, because the Russian people had a right to know who was going to be in their government. As this appointment was made just before the election, one could not accuse the man of currying favour or even paying any attention to the democratic process.

Anyway, Putin won the presidential election, was nominated and reappointed Fradkov, who was confirmed by the Duma for the second time in May 2004.

Alack and alas, Mr Fradkov hardly made an impression on any policy whatsoever, much of the running as far as relations with the West were concerned, being done by the Deputy Prime Minister and one of Putin’s possible successors, Sergei Ivanov, one of the siloviki.

At present we are some six months away from the presidential elections. Nevertheless, Putin has decided that a change was needed and sacked his entire Cabinet a day or so ago. The assumption among all and sundry both in Russia and outside it was that he would promote Sergei Ivanov, who has been presenting the tough face of Russia at every possible international opportunity. If Ivanov, former Defence Minister and more recently first Deputy Prime Minister, became Prime Minister, the reasoning was, it would be he rather than Dmitry Medvedev, also Deputy Prime Minister and Chairman of Gazprom’s Board of Directors, who would be tapped as Putin’s successor.

Both Medvedev and Ivanov are of the Leningrad/Petersburg mafia, with long-standing ties to Vladimir Putin. Medvedev, born in 1965 is the youngest of all those discussed here, so he may be less worried about the future than the others.

So, yesterday everyone assumed that Sergei Ivanov’s promotion will be announced. But President Putin had other ideas and he appointed the hitherto unknown Viktor Zubkov just as four years ago he had appointed Mikhail Fradkov. Zubkov is, of course, even less known, having been in the last few years Chairman of the Federal Financial Monitoring Service, set up and then re-set up to deal with money laundering. I am not sure Zubkov can be considered to have been wholly successful in the field.
Zubkov is also of the Leningrad/Petersburg mafia, though he had not served in either the KGB or the FSB. So he is part of Putin’s inner circle and, thus, not as surprising an appointment as some people might think. 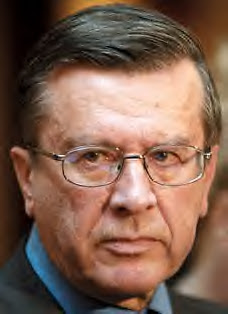 It is time to read the runes and that is what everybody has been doing for the last 24 hours. Ah, how it takes me back to the good old days of Kremlinology.

Could it be that Putin has decided that Ivanov has become too powerful with too good a following among ruling circles; that he would not stand for Putin running things behind the scenes after the next election when the latter, as things stand constitutionally, will have to resign; that he had to be humbled as overmighty magnates of the eighteenth century had to be humbled by the various tsars (or, more likely, tsartsas)? It could.

Could it be that Zubkov, an insider but with no power base and 66 years old is a better bet from Putin’s point of view for the presidency? It could.

Could it be that Putin is playing a game with the West and promoting somebody who is not going to be quite so loud and arrogant in his dealings or that Putin has realized that, as a matter of fact, all that stamping of feet and shaking of fists has led Russia nowhere particular as we on this blog have certainly pointed out once or twice? Hmmm, yes, it could, though he has never before shown any real acumen as far as foreign policy is concerned.

Today, Friday, the Duma is due to approve President Putin’s choice. One does not need to read the runes too hard to assume that it will do so without the slightest problem.