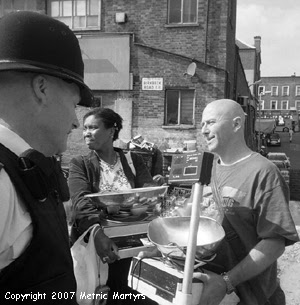 Christopher Booker writes today in the Sunday Telegraph of how last week "marked the moment when the long-running battle over 'metric v imperial' finally collapsed into total farce." He continues:

Scarcely had headlines been blazoned across almost every paper in the land proclaiming, "Victory for the metric martyrs as EU surrenders" and "We've kept our pounds and ounces" – reporting that Brussels had now conceded that UK traders can continue to sell in non-metric measures indefinitely – than the reality behind a great deal of misleading hype was brought home by an incident in Ridley Road market in east London.

Around 11 am on Thursday, two policemen and two Hackney council officials arrived at the market stall run by Colin Hunt – one of the original five "metric martyrs" whose criminal conviction for selling in pounds and ounces was upheld by the High Court in 2002 – to seize two sets of imperial scales. Another prosecution, Mr Hunt's third under UK law implementing EC metrication directives, is to follow.

When the new law came into force in 2000, Mr Hunt initially complied, selling his fruit and vegetables in kilograms. But when his customers, mainly from local Afro-Caribbean and African communities, protested, saying they did not understand the new measures, he reverted to selling in the weights they preferred, as do more than 20 other stalls in the market to this day, none of which have been prosecuted (Mr Hunt, whose mother started the stall during the blitz in 1940, is one of the few remaining East End-born stallholders).

All this seems flatly to contradict last week's announcement by EU commissioner Gunther Verheugen that the UK will now be allowed to continue using imperial measures as "supplementary indicators" indefinitely. He went even further, by attacking "the tabloid press" for having "repeatedly and erroneously printed stories" about "people having to buy their food from markets in kilograms rather than pounds". "This has led to serious confusion," he said. "Pounds and ounces are in no way under threat from Brussels and never will be".

How can this be reconciled with Hackney's seizure only two days later of Mr Hunt's scales? The fact is that, regardless of anything said last week by Mr Verheugen and much of the British press, the UK law implementing EC directive 80/181 remains exactly as it was, as does the Government's statutory instrument of 2002 outlawing any reference at all to non-metric measures after 2009.

Hackney's trading standards officials, supported by PC Andy Stafford (pictured), may be viewed as acting over-zealously (particularly when the council appears to be singling out Mr Hunt for such attention when other traders are ignored). But they are enforcing the law as it stands, as was confirmed last week by Ron Gainsford, head of the Trading Standard Institute, stating "there is no change to the existing legal requirements" and that his members would continue to apply "a pragmatic, proportionate and sensible approach to assisting business compliance with UK legal requirements".

Whether Mr Hunt's lawyers, supported by Neil Herron, director of the Metric Martyrs (campaign fund), agree that Hackney' actions are "proportionate and sensible" remains to be seen. But the truth is that the prolonged battle to make Britain exclusively metric has left us in a shambles.

So fed up is the Commission with the negative image this gives the EU that it has finally backed off, saying in effect "nothing to do with us, guv". But the laws imposed by the UK Government to implement EC directives remain in force. Only when our own politicians act to change those laws can this absurd confusion finally be ended.