There may yet be hope 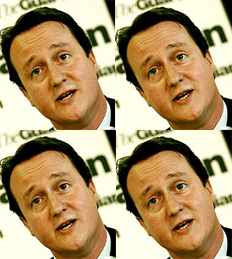 Possibly stung by criticism that he is not pushing hard enough for a referendum on the EU constitutional reform treaty, David Cameron is telling The Daily Telegraph that he is planning a Parliamentary ambush "in an attempt to force Gordon Brown to grant the British people a referendum."

One cannot avoid observing that it will not be a very effective ambush if you advertise it but, letting that pass, we find that what the Boy is really talking about is allocating an Opposition day debate to the issue, and putting down a very simple and clear motion to support a referendum on the European constitution.

He would thus force a Commons vote demanding a referendum. By this means, he will "push the government all the way on this issue". With most of the 195 Conservative MPs certain to vote for a referendum, at least 100 Labour backbenchers sympathetic to it, and the Liberal Democrats increasingly split on the issue, Mr Brown's Commons majority of 69 is seriously under threat.

Furthermore, he is promising that if the Tories came to power in an early general election, they would hold a referendum and he would campaign for a "no" vote.

Meanwhile, later today, leading unions are expected to vote for an EU referendum at the TUC congress in Brighton. If it actually happens – and I remain sceptical that it will – then that will further increase the pressure on Brown.

So far, however, the government is conceding nothing. But with Cameron adopting tactics which, at last, we can applaud, and the unions gunning for Brown, there may yet be hope.