Can't have that, can we? 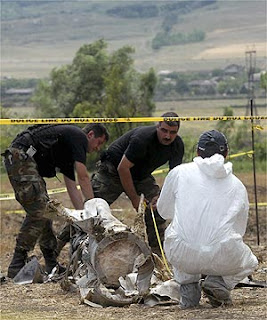 We do have some extraordinarily useful people among our readers. They send us links and information from many different parts of the world, some near, some far. This one is not from very far. In fact, it is from Sweden, though the story is about Georgia (not the one through which General Sherman marched but the country that is still fighting to ensure that its independence from Russia is fully functional).

About a month ago we reported that after Georgia had reported a Russian missile dropping on its territory (not a unique occurrence), several countries came out in her support. There were plans to investigate the episode and to call together the New Friends of Georgia group.

We also reported that the tranzi organizations to whom Georgia also appealed behaved in their usual fashion, with the EU bleating as is its wont. The Portuguese Presidency called on both sides not to escalate the crisis.

Meanwhile the proposed meeting seems to have gone ahead and the Georgian Minister of Foreign Affairs, Gela Bezhuashvili, has been travelling to various countries to drum up support for his country and her membership of NATO, it being “the highest priority of [Georgia’s] foreign policy”.

On September 13-14, a meeting of the foreign ministers of the New Group of Friends of Georgia will be held in Vilnius involving the Ministers of Foreign Affairs of Georgia, Lithuania, Latvia, Estonia, Ukraine, Poland, Romania, Bulgaria and the Czech Republic, as well as the Minister of Foreign Affairs of Sweden and the European Union's Special Representative for the South Caucasus.

Vilnius, incidentally, is becoming quite a hub or international relations. Mid-October will see a conference on matters to do with energy supplies to Europe that will involve the countries of the Caspian Sea area as well. (I quite like the idea of an Energetic Summit, as Trend News Agency puts it.)

However, according to Swedish news reports, [link in Swedish] the EU is not happy. Or some members of it are unhappy. They feel that, in offering Georgia help certain countries did not behave in a particularly communautaire fashion.

I must admit that while I can decipher the odd word, my knowledge of Swedish is inadequate, to put it mildly. However, our correspondent has kindly translated the article for us and I shall use his version:

When the ambassadors from the EU countries met within the framework of the common foreign- and security policy (GUSP) last week, there was criticism directed against Sweden, Estonia, Lithuania and Great Britain who all had quickly responded to the request of the Georgian government.

The criticism that came from one of the countries on the Mediterranean shore (neither Spain nor France) centred on the fact that this question should have been discussed in the EU before any action was taken. One thought that the countries concerned had "acted too hastily".

Also, the same critics wanted the EU commission to investigate whether EU could not obtain readiness in this area so that next time a similar incident will occur the EU can send a delegation of experts. Apparently a report along those lines is being prepared.

No doubt, the Georgians will find that very reassuring.