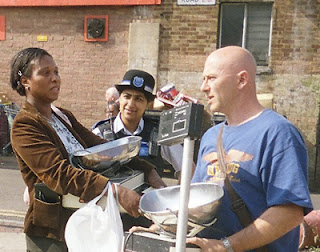 With a copy of the Barroso speech to the Lib-Dims now available, we see some curious omissions from media reports, most notably from The Daily Telegraph.

Opening his speech, the commission president made great play of how "Europe" was still seen as "remote, bureaucratic and undemocratic". And, he complained, "Intentional fabrication of stories like the notion of removing the Queen from UK passports, or claims that the UK will lose its UN seat do not help".

Turning then to happier thoughts, he added:

Occasionally, a flash of reality slips through. Apparently someone in the press just last week discovered that we in the Commission are no longer a threat to the pound, the inch or even the mile. But we need to take the next step, beyond putting the Euro-myths to rest.

Very much as predicted, we are going to hear a great deal about the "Queen and passport", and the UN seat, myths which have been assiduously peddled by the right-wing press and, indeed, the Tory party.

But, bizarrely, on the metric issue, Barroso is peddling his own myth. Far from ceasing to present a threat to the "the pound and the inch …", the local government coordination body Lacors has felt impelled to write to trading standards enforcement officers, reminding them that:

Local Authorities must continue to demonstrate their commitment to consistent, proportionate action to ensure that those remaining traders who continue to trade in imperial units through ignorance of the law or misleading media coverage, do convert to selling in metric units, and to ensure that cohesive action is taken over any remaining high profile traders who refuse as a point of principle to comply.

But, so completely have certain sections of the media bought into the Commission's myth that, despite the corrective by Booker last Sunday, Neil Herron has found few takers for the story of trading standards seizing Colin Hunt's scales (pictured).

Thus, we have two Euro-myths from the right and one from the commission itself, the only common factor being that, in all three cases, the media have swallowed them whole. Something, one might say, of a myth-match. If it weren't so serious, it would be hilarious.