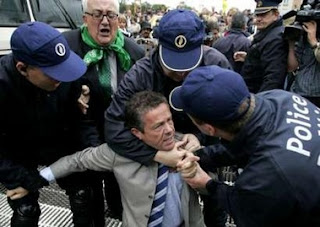 It seems that the demo in Brussels is going ahead, though with considerably smaller numbers than predicted back in the days it was thought that the event would be legitimate.

AP reports in the International Herald Tribune that about 200 people converged on two squares in the EU area of Brussels (this is the bit that will be patrolled by the international BFOR (Brussels Force) when the Kingdom of Belgium splits into various component parts.

The 200, according to this story, faced about 100 police, heavily armed and protected, backed up by helicopters and water canons.

Reuters does not differ greatly but mentions that two leaders of Vlaams Belang were arrested, as the photographs show. 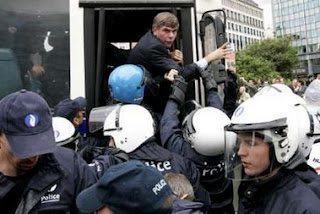 The most detailed account comes from Brussels Journal. It is a slightly round-about sort of account in the first place, as it comes from Gates of Vienna, with Baron Bodissey getting telephonic reports from people on the scene.

This story gives 500 as the figure for the demonstrators and other reports say (we, too, have telephonic communications) say that there were at least 300 police.

The story remains muddled as is normal with events of this kind but it seems reasonable to assume that Vlaams Belang members and leaders were targeted by the police and not in a particularly pleasant fashion. If they want to make that party even more popular, they are, of course, welcome to do so.