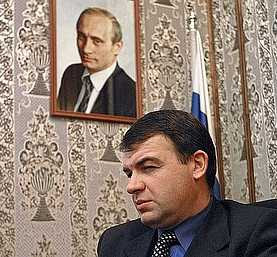 The new Prime Minister of Russia, Viktor Zubkov, met President Putin today in Sochi, a Black Sea resort. According to his statement later to reporters he handed a list of potential ministers over to the President. The cabinet, he added, will be put together within the required time framework.

One person will not be in that list: the acting Defence Minister, Anatoly Serdyukov (pictured), promoted by Putin in February from his then rather lowly position of tax police chief, has asked to be relieved of his duties.

As usual with Russia, one spends a great deal of time trying to read those runes. Is this significant. After all, the one thing Serdyukov seems to have achieved is to dismiss many of the senior military who had served under his predecessor, Sergei Ivanov, now Deputy Prime Minister (so far).

The reason given is that Serdyukov is Prime Minister Zubkov’s son-in-law and, therefore, it would appear, does not consider it right that he should stay in the cabinet. Well, that’s always possible but I can’t help remembering the wonderful Greek Archbishop in Evelyn Waugh’s brilliant if somewhat underestimated novel of the Phony War, “Put Out More Flags”.

The Archbishop in question would wander round the Ministry where the anti-hero Basil Seale found a billet, explaining to all and sundry that he was “expulsed” as a result of some political manoeuvring because the reason given could not have been true: “They don’t expulse for fornication”.
Posted by Helen at 19:49