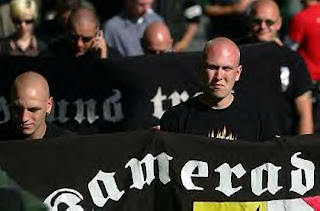 Those of our readers who have been following the stories of racist attacks by skinheads and neo-Nazi groups in Germany may well have noticed a certain pattern there, one that we have mentioned in previous postings: they all occur in the eastern part of the country that is the former German Democratic Republic, a.k.a. the Soviet colony of East Germany where a younger Vladimir Putin served as a KGB officer.

According to a story in Spiegel there have been allegations that the police in those states are not all that anxious to investigate the crimes or pursue the criminals.

The eastern state of Saxony-Anhalt, which had the highest incidence of far-right attacks in Germany last year, has launched a parliamentary inquiry into the region's police force following accusations that it has failed to investigate racist assaults properly.

The same article points out a fact that has been a kind of an open secret to anyone who knows anything about Germany:

Ever since unification, eastern Germany has seen a high level of far-right violence including random assaults on foreigners, arson attacks on kebab shops and swastikas daubed on Jewish cemeteries. The country's Jewish lobby last month echoed warnings from anti-racism campaigners that the region had become a no-go area for minorities.

This is not altogether surprising. In fact, many of us predicted such a development. There are several possible reasons for this. The most obvious one is that Germany’s economic woes, caused to a great extent by the hasty reunification, have hit the eastern sector much harder.

The old Communist economy could not survive any kind of competition despite the enormous amount of money that was pumped into the former GDR as structural funds, attempts to keep up the old industries long enough to give people jobs and so on. Not that is all gloom and doom even in that part of the country and many people have adjusted, though for a good number adjustment was movement further west.

According to Spiegel, many of those who have gone to the west of the country in search of better opportunities have been female:

Depopulation is a further factor -- educated young women have been moving away (more...) to get jobs in Germany's more prosperous regions, leaving behind bored, unemployed young men who seem to get a kick out of neo-Nazi ideology.

That may be true, though I would guess that a good many of educated young men who have some get-up-and-go also got up and went.

However, I cannot help feeling that the biggest problem lies in the history of the GDR. While West Germany was being put through the wringer and made to face up to its past as a Nazi state, the rulers of East Germany and the colonizers thereof announced quite cheerfully that by embracing socialism and big brother, the East Germany had effectively discarded their Nazi past without any problems.

Clearly, it would not seem wrong to the youngsters who had been brought up by people unable to understand that there might have been the odd problem or two in the years leading up to 1945 in Germany in neo-Nazi ideology, if one can honestly call it that.

This, of course, is likely to exacerbate problems for the European project, which is based on the idea that Germany (in the first place West Germany) must feel guilty. As far as the wessies are concerned, they have quite genuinely expiated their guilt. The generations that are active now had nothing to do with the Nazi system, which lasted for 12 years only. It is, as we have mentioned before on the blog, time for Germans to accept that they are just that and their history had some bad things, some very bad things and a lot of good things.

The addition of former East Germany has simultaneously helped and hindered progress. The hindrance was obviously economic – at a crucial moment of its post-war history Germany found herself in an economic swamp for all sorts of reasons.

The presence of the neo-Nazis in the eastern regions and the apparent reluctance by the police to do anything about their violence is also a hindrance as it will give everyone and excuse (Commissar Frattini being the first one) to resume their arguments that Germany is uniquely evil and only the European Union can deal with that situation.

On balance, though, I think reunification and the necessary acknowledgement of the trouble caused by Communism that lasted a good deal longer than Nazism but has never been acknowledged to be a problem by the European Union will help the process of Germans finding their own identity in the twenty-first century. Just as soon as they have sorted out those hooligans in the eastern states.
Posted by Helen at 00:57