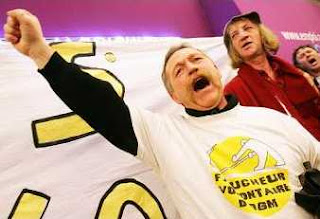 One of the longest-running and most entertaining conflicts in the EU (from our point of view) is the battle between the commission and the Council over the approval of GM crops.

With Austria in the forefront and Poland not far behind, France too has had it moments.

But now, according to Le Monde, France is upping the ante – leaping into first place amongst the GM refuseniks - by planning a complete freeze on the sale of GM seeds. The actual ban, we are told, will be announced next month a national conference on the environment, involving farmers, business and advocacy groups.

This has provoked an immediate protest from the commission, which has sternly reminded France that such a ban is prohibited by EU rules. "A general ban is not possible" for an EU state or region, says Barbara Helfferich, spokeswoman for EU environment commissioner Stavros Dimas.

Behind the pressure for a ban in France is anti-globalisation campaigner José Bové (pictured), who still exerts a powerful influence on French politics and is not one who Sarkozy will cross willingly.

But the ultimate irony of all this is that the commission, despite having bribed groups like Friends of the Earth, it is finding that the Greenies are causing no end of embarrassment. Having recently opposed industrial-scale biofuels, they are also opposing the very thing which some experts say is the only option for increasing production of crops to meet the demand for food and renewable fuel sources.

Although it has paraded itself as the champion of the environment, it seems the commission has yet entirely to convince the greens.