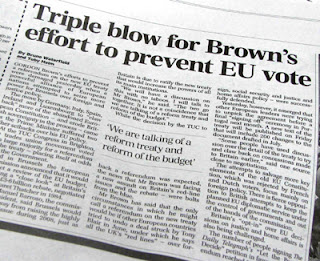 While the bulk of today's media focuses on the TUC vote yesterday, demanding an EU referendum. The Daily Telegraph picks up what could well be one of those seismic issues which has the potential to turn the tide of the whole referendum debate.

On the spot in the heart of the "non-imperial empire", Brussels correspondent Bruno Waterfield is reporting on a "powerful alliance" of European nations who are attempted to seize more power for Brussels over foreign and justice policy, over which Foreign Office mandarins are beginning to show real concern.

While the Daily Mail thought that this was Gordon Brown grandstanding, it seems there is substance to the issue.

The source of concern is a move afoot by Germany, Italy, Spain, Ireland and Luxembourg to "claw back" more of the "abandoned" EU constitution, the net effect of which will be to erode even further the power of member states.

What is highly significant here is that, while previously, the "colleagues" have been at pain to stress that the June European Council "mandate" cannot (or must not) be changed – in the sense of any weakening of the provisions – this now appears to be a one-way process.

With a new draft of the treaty due out tomorrow, it seems that there have been some 200 changes to the original draft, some of which involve serious additions to EU powers and some directly challenge Mr Brown's fabled "red lines".

Some of these issues relate to jurisdiction over foreign policy but Britain's "opt-in" over justice and home affairs is also being challenged, while other details – yet to emerge – may have profound popular impact.

On the back of this - with a maladroit sense of timing which could only come from an apparatchik totally divorced from the realities of politics – Barroso has announced that he is to carry out a fundamental review of the EU budget, including a "close look" at Britain's rebate.

"We will have a discussion on this with no taboos. I will talk to Mr Brown," says el presidente. "The two go together. It is not a coincidence that we are talking of a reform treaty and reform of the budget."

The timing could not be more sensitive as the discussions will reach their peak next year, just at the time when Britain and the other member states are going through the ratification process on whatever treaty emerges from the summit next month, when the EU will be high up on the political agenda.

Nothing could be more calculated to stoke the flames of resentment at EU intrusions and, with the highly sensitive proposed changes to the treaty – which will be revealed tomorrow – the debate seems set to capture the popular imagination in a way that it has not done so far.

In taking the actions they have, the "colleagues" seem to be going out of their way to provoke adverse reactions. One wonders, almost, whether they have a death wish.