The wolf is here! 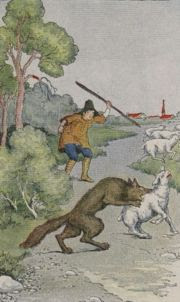 After the total non-story by The Daily Telegraph last Monday, claiming that the Queen was to be replaced on the UK passport, followed by the illiterate Hefferant, the paper's Brussels correspondent, Bruno Waterfield today brings us news of a far more serious development which could, in the fullness of time, have precisely the effect which the Telegraph earlier claimed – and much worse.

But, having cried "wolf!" over a non-existent threat, the paper consigns the news to a small, down-page item in the recesses of the "book", barely giving it any coverage at all.

The cause of Waterfield's alarm is but one of the 200 technical amendments secreted into the new draft treaty, to which he referred yesterday, in this case an amendment to Article 18 TEC. At the UK's insistence, the final Article which was to emerge from the treaty up for agreement included a new clause 18.3, which had the text read as follows (our bold):

1. Every citizen of the Union shall have the right to move and reside freely within the territory of the Member States, subject to the limitations and conditions laid down in this Treaty and by the measures adopted to give it effect.

2. If action by the Community should prove necessary to attain this objective and this Treaty has not provided the necessary powers, the Council may adopt provisions with a view to facilitating the exercise of the rights referred to in paragraph 1; the Council shall act in accordance with the procedure referred to in Article 251.

Now, replacing the 18.3 clause is a new text that reads as follows:

If action by the Union should prove necessary to facilitate the exercise of the right referred to in Article [I-10(2)(a)], and if the Treaties have not provided the necessary powers, the Council, acting in accordance with a special legislative procedure, may adopt provisions concerning passports, identity cards, residence permits or any other such document.

This, as Waterfield's piece in today's paper rightly says, "could pave way for European ID card", and indeed a Euro-passport. Furthermore, he tells us, Britain has agreed to this change – despite having vigorously opposed it earlier – "in order to participate in EU security measures, such as biometric passports and ID cards".

For sure, it does not mean necessarily that the EU move towards creating a "single European passport", issued under the authority of Brussels (possibly combined with the mandatory ID card and resident's permit) but, since that has been on the agenda ever since 1985 with the Adonnino Report on a "People’s Europe", it is a fair bet that this is the intention behind the new amendment.

Given that agenda – and the government's apparent cave-in – there would be every justification for running the story big, with front page treatment but, since the Telegraph has already cried "wolf!", it could hardly go rushing out into the world with a completely different story.

Hence, with the wolf about to ravage the sheep, the paper is muted. That is the real penalty of these silly Euromyths. While the media hyperventilates over miasma, the "colleagues" plot and scheme, introducing their dry, technical amendments which gradually build up their powers, under the cover of the hype.

And when, like as found the little shepherd boy who then cries "wolf!" because the predator is really at the door, when the warnings are sounded, no-one takes a blind bit of notice. They have heard it all before.