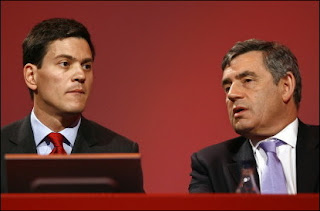 That is The Daily Telegraph leader today, bemoaning the fact that the Party is not responding to "public dissatisfaction" on the EU referendum. "There is at least one subject on which Labour ministers do not hedge," it says: "As David Miliband made clear yesterday, there will be no relenting on their refusal to grant a referendum on the European Reform Treaty."

But, when it comes to the tangible expression of that "dissatisfaction", the self-importance of the newspaper dribbles onto the page as it declares that "nearly 100,000 people have signed the Daily Telegraph petition demanding a referendum", then only adding that, "dissidence on the subject within Labour ranks and the trade union movement is growing."

"Most importantly," (but not more importantly) it then concedes that the refusal "flies in the face of Gordon Brown's much-touted commitment to people power, citizens' panels and to a Government that listens to public dissatisfaction."

Those with slightly longer memories, however, may remember the No. 10 petition on road pricing, started by a private individual. When the newspapers (including the Telegraph) got behind it, signature numbers soared to 1.7 million, a record which stands to this day. By any comparison, the current figure attracted by The Telegraph is pathetic – a sign more of indifference than any real passion.

Meanwhile, one of the original No. 10 petitions struggles manfully to reach 20,000 – lingering a few hundred short for some days now – ignored completely by the media, while Farage's "spoiler" languishes at 3,548 and Geoffrey Van Orden’s effort has attracted a risible 2,078.

With The Sun joining the fray (second time round), this brings a heavyweight player into the field but the sole recognition from the Telegraph is in the Daniel Hannan blog, noting that the tabloid's petition "hasn't yet done as well as that organised by the nation's leading quality daily". 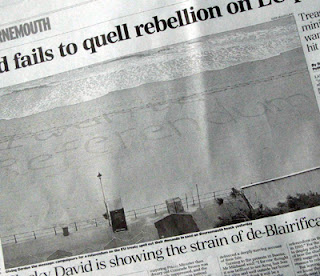 Remarkably, although The Sun's campaign, from all accounts, took Bournemouth by storm – it being virtually impossible to miss the "battle bus", the "Page 3 girls", the 20 "ad-vans" and all the rest - it was a total non-event in the Telegraph report. And, for its picture, it chooses a contrived scene on the beach - the only bit not occupied by The Sun - a covert advert for the Open Europe clone, I want a referendum which, surprise, surprise, is also running its own petition.

Meanwhile, The Sun, having invested so heavily in the campaign yesterday, has already run out of steam, relying on a filler from David Cameron who tells us, "I'll give you vote". And who cares?

Miliband, of course, remains unmoved, with his boss standing by him. And, with Labour ahead in the polls by no less than eleven percent, the Tories in disarray verging on panic, and even the blogosphere totally uninterested in the referendum, Brown can afford to put two fingers up.

Why should he even bother to listen?