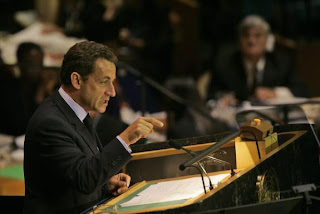 I don’t like to say I told you so but the fact is, I told you so. Nicolas Sarkozy, I said, would be a hoot as President of France. And I was right. We have had endless entertainment since he was elected whether it be his wife jetting off to Libya to free the Bulgarian medics who were “French in her heart” or him sharing burgers with President Bush.

So there he was, addressing the UN General Assembly [link in French] with a bunch of wonderful though “not very detailed” ideas about how the world should be run.

France, he told the assembled delegates, has always looked for ways of producing greatness for people than herself (one assumes the guffaws were restrained but one cannot be sure). Therefore, in the name of France he appealed to the United Nations to

provide the means for all people across the world to have access to vital resources such as water, energy, food, medication and learning. [my translation]

And, of course, in the name of France, he will call for the abolition of the Common Agricultural Policy the many different protectionist regulations that prevent the developing countries from trading with us and will insist that the EU will buy agricultural goods from countries that use strictly controlled domestic spraying of DDT in order to vanquish malaria. Well, since you ask, he did not say any of those things.

Calling for a closer international co-operation against terrorism he also called for the UN to create a new world economic system, which would entail greater redistribution, greater control, “a New Deal of economics and ecology”. As Le Monde rather sourly points out, details came there none.

Perhaps, President Sarkozy is gearing up for the next stage of his battle with the European Central Bank; if he does not win through the Constitutional Reform Treaty, he will go to a higher authority.