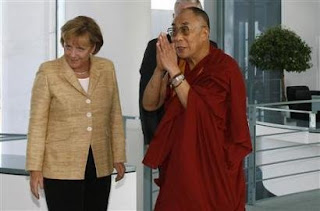 While the world’s attention is focused on the Labour Party Conference events in Burma, it might be worth recalling that there is another country where Buddhist monks and nuns have in the past protested against political oppression and have been seriously maltreated.

I am, of course, talking about Tibet, that country conquered by China some decades ago, whose population has been purged, imprisoned and murdered; whose culture has been destroyed; and whose rights are not exactly acknowledged by the rest of the world. We do not want to be too unpleasant to the People’s Republic of China, do we now?

To be fair, the Maoist regime saw horrors in China itself that easily rivalled what went on in Tibet.

The Dalai Lama, Enemy Number One for the PRC, is generally revered by all and sundry in the West and flaky Hollywood actresses tell us how much they admire his holiness.

Sadly, few people realize that the Dalai Lama is also a political figure of considerable importance. One of those who does is Chancellor Angela Merkel, who received him officially in the Chancellery a couple of days ago.

This was breaking ranks with the unofficial common European position on Tibet and has caused a great deal of anger in China, where Merkel has been attacked officially by Foreign Ministry spokeswoman Jiang Yu for interfering “grossly” in China’s internal affairs and hurting the feelings of the Chinese people.

As Spiegel points out the people of China are unlikely to know a great deal about it, since the visit has not been mentioned in the official press. However, there has been one interesting development:

On the Internet, however, bloggers sharply attacked Merkel and even insulted her. "This woman has never been friendly toward China since she has been in power," was one of the milder comments. The harsh rhetoric is interesting because personal attacks on domestic and foreign politicians are usually not tolerated by the censors. The exceptions are the Dalai Lama and the Taiwanese President Chen Shui-bian, who is fighting for the independence of the island from China.

One cannot help wondering why the Internet has been so voluble on the subject. After all, if needs be, those bloggers can always be disowned by the government.