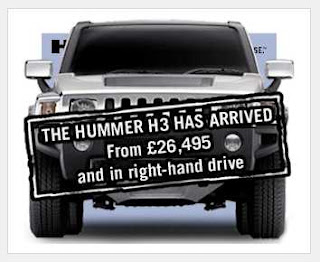 It is perhaps a little unfortunate for The Times (on-line edition) that it should be running an ad for the gas-guzzling Hummer, newly arrived in Britain in the right-hand drive version – for a cool £26,495 (starting from).

Slated as an icon of wasteful consumerism, what is particularly delicious is that the paper is running the ad alongside an article extolling the virtues of energy saving light-bulbs, the programme for phasing out incandescent bulbs having been announced at the Labour Party Conference – despite their very obvious problems.

If I could afford one of these beasts, I would go out and buy one tomorrow, just to piss off the Greens (and the Labour luvvies) and use up all that energy I have been forced to save on light-bulbs I do not want (less the energy lost on replacing perfectly good light fittings because they cannot take the CFL bulbs).

Unfortunately, according to this report, on a "dust-to-dust" basis, the Hummer uses less energy than a Toyota Prius hybrid, which rather takes the edge off it – although the Greens would never be so cute as to accept that.

But, what is really seriously irritating is a Labour government yet again interfering with our freedom of choice (at the behest of the EU) instead of knuckling down to sorting out our energy policy and getting some pebble bed reactors up and running.

The trouble is, though, that we can't expect any better from the Green (Boy) King - much less little rich boy Zac Goldsmith.