The Sun has got its hat on … 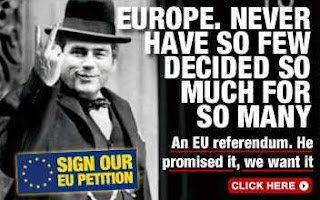 You all know the next words, and at least a few cheers for The Sun which is taking the EU referendum issue on with a full-frontal assault in today's newspaper.

The graphic sums up Brown's attitude to perfection, putting two fingers up to the nation. He has the power, and he knows it – and is prepared to go ahead regardless of what anyone thinks.

Even if the paper's prose is a little over-blown, describing the new treaty as the "Greatest threat since WW2", it is correct in declaring that "Gordon Brown is about to sign an EU Constitution that would change for ever the way we are governed." 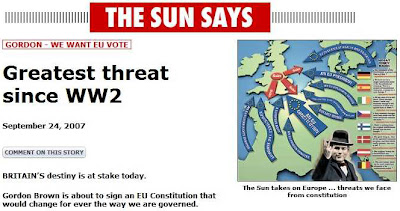 Thus, it is launching "a battle to win a referendum on the Constitution" and, in so doing, has published a poll which makes the threat personal.

Brown would "pulverise" the Tories in an election "with a staggering 17 percent lead," says the paper, "IF he gives the people a vote on the EU Treaty". On the other hand, Labour and the Tories would be "virtually neck and neck if he refuses to grant a referendum." A "massive 81 percent" want a referendum and two thirds — 64 percent — believe Mr Brown is going back on promises by refusing to grant them a say.

Tory Diary thinks that this creates "another risk factor" to add to the many, in Brown's calculations on whether to hold an early election.

But what is almost impossible to say is whether the increasing speculation on a snap election is simply media frenzy, which will evaporate with the end of the conference season, whether there is some substance to it, or whether the media is intent on creating a self-fulfilling prophesy.

To try even to guess which way this is going to pan out is merely to add to the speculation, as there is only one man who can decide whether there is going to be an election – and he ain't saying. The "clunking fist" may be playing games – he may not but, if he is leaning towards an early election, The Sun may give him pause for thought. Or, maybe not.