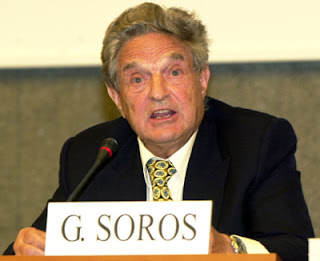 As we have written before, George Soros, the indefatigable and unsuccessful warrior against President Bush, whose entirely legitimate and somewhat left-of-centre presidency he has compared to the Nazi regime, is planning to set up a European Council on Foreign Relations.

Its website has the catchy address of onevoiceforeurope. Its aim is to unite and strengthen "Europe" for it to stand up to the terrible United States, particularly as long as Bush is President.

Sadly, if things go on as they have done, there may well be a new President by the time Mark Leonard, the europhile wunderkind can take over as Director of this new organization. The website is still just a temporary one with the real one promised late in 2007. Make that very late.

We must assume that the plan will come to fruition at some point and we shall have this very well funded think-tank trying to influence politics within the European Union, which means in Britain among other countries.

In that connection, it is worth having a look at this posting on a blog called Sweetness and Light. The title, I assume, is meant ironically. Steve Gilbert, the author, got hold of some documentations, which the Open Society Institute presumably is obliged to make public, about its income.

According to that temporary website it will be the Soros Foundation Network that will be donating money to it, not the Open Society Institute but there seems to be a certain overlap, financially speaking, between all these different bodies.

It is interesting to note that money had been received from the Federal Government, an astonishing idea when one considers Soros's frenzied attempts to destabilize its constitutional structure, and also from the United Palestinian Appeal, a relief charity whose name speaks for itself. What does not speak very clearly is any reason why the Soros outfit should be getting money from them.